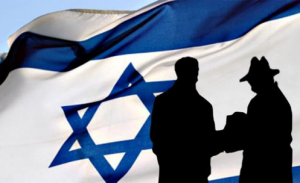 Jerusalem, Israel — December 19, 2014 … Part of the following was communicated by the Israel President’s Office to the Israel News Agency.

“The female Mossad agent operated deep in enemy territory and was recruited to the Mossad just a few years ago.  She took part in complex assignments, critical to Mossad’s operations, while under life-threatening conditions, and was congratulated as an exemplary role model for the young generation of fighters.”

“Intelligence agencies around the world are proud of their expert operatives, who work ‘like machines’, said President Rivlin.

“People trained to complete every mission, every objective and every target, at times cruelly and without defined limits.  We’re proud that the Mossad is made up of people – human beings.  Fighters whose strive for perfection, and bravery, operating with responsibility and judiciousness.  Fighters armed with the best equipment and intelligence, but whose capabilities and performance rest on their wisdom and bravery, on their ability to differentiate between victim and aggressor, between innocent and guilty, between acceptable and unacceptable.  Fighters who don’t have an appetite for war or feelings of revenge.”

“Wisdom, bravery, prudence, responsibility and commitment to Israel’s security, – the secret of success for the heroes who fight Israel’s battles in the shadows.  This is their compass, their objective and path.  These are the values that you carry with you to every assignment and operation.  This ethical compass has greater importance than the weapons and intelligence you carry.  This is what differentiates you from every other intelligence agency, from every other secret service.  Only with this ethical compass can wars be waged and won.” 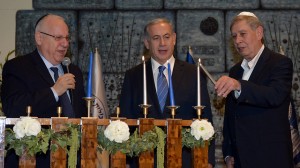 Israeli Prime Minister Benjamin Netanyahu said: “I would like to thank here all the servicewomen and men of the shadows, from every generation for the Mossad’s excellence, responsibility and courage.  The threats around us are multiplying and spreading across the world, though your work is also being done across the world; our enemies are crossing ethical boundaries, and your work is crossing the borders of the imagination.  You do things that if a producer of sci-fi films wanted to reproduce on screen, they would not be able to even imagine what you’re doing – and these are very important for the State of Israel.

“I know that some of your friends and colleagues are out in the field, and I hope that you all will be able to light candles for Chanukah.  I’d like to send with you happy holiday greetings, and I know that they won’t forget for a second who sent them and why, and I hope the candle will light up their hearts.

“I would like to thank you for your tremendous sacrifice for the security of Israel.  Your work is done day by day and night by night.  You perform this work with diligence, devotion to your objective, far from the spotlight.  Your activities take place in a wide range of fields, some of them under dangerous circumstances.

“I would like to thank you for the work you’re doing and the work you will do for the State of Israel.  You should be proud of yourselves as we are proud of you.  Be blessed and Happy Holidays to you all.”

Mossad Director Tamir Pardo said: “In a changing world, full of threats and challenges, we incorporate different capabilities of various branches within the Mossad, as well as the IDF, Israel Security Agency (ISA), Israel Police, Foreign Ministry and other friendly services around the world.  This integration is what allows us to accomplish outstanding and unprecedented achievements.

“The strength of every agency is derived from its ability to understand the challenges oftomorrow are different than the challenges of yesterday.  We constantly have to change and adapt ourselves to new realities, to more sophisticated enemies and challenges, to new objectives and unknowns.

“This year’s outstanding servicemen and women represent the wide range of the Mossad’s activities – operational, intelligence, logistical and technological.  This complicated machine must operate at the highest level, smoothly and together.  The strength of this chain is dependent on the strength of its links.  All the links of the Mossad are strong and durable.

“I would like to thank you, selected servicemen of 2014, and to show you my appreciation for your work, not only in the past year but throughout your service in the Mossad.  You are a source of pride and inspiration for the entire agency.  A special thanks to you – family members, who have made it possible and supported them, patiently, with understanding and love.  Happy holidays to everyone.”

One of the outstanding servicewomen honored, is a young fighter who operated deep in enemy territory, and was recruited to the Mossad just a few years ago.  The fighter took part in complex assignments critical to the Mossad’s operation while under life-threatening conditions and is an exemplary role model for the young generation of fighters.

Another outstanding servicemen honored, is a technology expert who developed new technological operational capabilities to facilitate the special work of the Mossad, and demonstrated personal initiative and creativity while tackling challenges at the forefront of technology.  He provided a solution to one of the most important and central projects the Mossad is occupied with.

Additional commendations were given to, among others, a fighter who led a team in a complex operation in enemy territory, an officer who participated in of the most important and sensitive operations to the State of Israel, and a serviceman who was stationed in three missions in unique and complex regions.

In this event, held for the fifth time, two workers received Lifetime Achievement awards.  The first was born in Iran, and served for 20 years, and the second worked for 30 years in the Mossad in various operational support positions.

The event began with Chanukah candle lighting, and a ceremony to commemorate 65 years since the establishment of the secret intelligence service.

The Mossad is responsible for intelligence collection, covert operations, and counterterrorism, as well as bringing Jews to Israel from countries where official Aliyah (immigration) agencies are forbidden, and protecting Jewish communities. Mossad’s director reports directly to the Prime Minister.