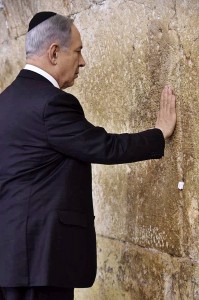 Jerusalem — March 19, 2015 … Netanyahu won. Obama lost. Obama, who hired a team of veteran campaign operatives and sent them to Israel to form OneVoice and V15 to defeat Netanyahu, lost. That makes Obama a wounded animal. He truly does not care what others think or feel. If they don’t his embrace his socialist agenda – they are out.

Obama made two mistakes with Netanyahu. He forgets that he’s Israeli. Yes, Bibi has a fine American accent, but his heart and brain are very Jerusalem. Netanyahu did not come to Congress to satisfy his ego or to secure another term as Prime Minister. He came to Washington to defend his home. To defend Israel.

When you attack Netanyahu, you attack Israel. You attack the Israeli family and we are very family whether you are Right or Left, male or female, black or white, Reform or Orthodox.

And this is why Obama lost.

But why were Obama operatives in Israel in the first place? This is what the CIA does in Syria, Qatar or Iran – not to a close, trusted ally – the only democracy in the Middle East – Israel.

Second mistake – Barry, we don’t live in Washington. We live 6,000 miles away where we experience Islamic terrorism on a daily basis. Where thousands of Hamas, Hezbollah and Iranian missiles are pointed at us. We will not allow one of those missiles to carry a nuclear weapon. One Holocaust was enough. We will never compromise on our security.

Obama’s background is Islamic. In his early years he learned that Jews were secondary. Obama actually embraces Iran more than Israel. And this is where his latent or blatant anti-Semitism has it’s roots.

“He doesn’t like Congress. He’s got his pen and his phone. And when Congress doesn’t do what he says he’s off doing his best Benito Mussolini. He doesn’t like Netanyahu. Netanyahu just won in a landslide; Obama’s never won in a landslide. The American people rose up in November and told Obama how they are disgusted with his programs and his policies. And what did he do? He turned around and spat in our faces. And he does the same in 2010 when they lose the House of Representatives. Obama has more ability to work with dictators and genocidal types than he does with people who are elected democratically. The fact of the matter is, Sean, I want to say this and this is important. Eric Holder said that this nation is full of cowards because we won’t have a discussion about race. Well, I think this nation needs to have a discussion about what’s going on in this White House and this administration about anti-Semitism. Because this White House and it’s reaching out to Sharpton, the Muslim Brotherhood, CAIR, all these radical nut jobs and groups, their policies which are — it’s not just Netanyahu. They’re willing to throw Israel over the side for the Islam regime in Tehran.This president’s former relationships with [Rashid] Khalidi, the professor in Columbia now, with Wright the so-called reverend from Chicago. This president has a lot to answer for, and his conduct is contemptible. And I don’t care how many liberal Democrat donors — hold on now. I don’t care how many liberal Democrat donors he has who are Jewish. He can hide behind them all he wants. But Mr. Holder, Mr. Obama, let’s have a national discussion about the anti-Semitism that reeks from your administration.”

When Barry does finally call Netanyahu, it won’t be to congratulate him. It will be to hurt him, hurt Israel, hurt every Jew who stands for the defense of Israel. Obama will tell Netanyahu that he and the so-called Jews of J Street will use the UN to hurt, to castrate Netanyahu.

Update – That call came about an hour ago. Obama reiterated his support for Israel “alongside a sovereign and viable state of Palestine.”

Does that mean Obama does not support Israel unless there is a state of Palestine?
And just who is Israel supposed to make peace with – Hamas, Islamic Jihad, ISIS or Hezbollah?

President Obama, swallow that Netanyahu won. Move forward. You made your phone call. Now understand Israel’s security and defense needs or become a target of impeachment.

Israeli’s, American Jews and Christians are not threatening on this one.

One thought on “Obama’s anti-Semitism – With Netanyahu Win, What’s His Revenge?”