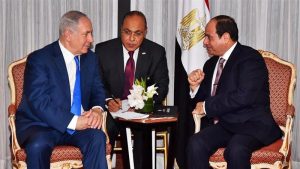 Jerusalem, Israel — November 19, 2017 … Israel Prime Minister Benjamin Netanyahu made the following remarks at the start of the weekly Cabinet meeting:

“Today we mark 40 years to the historic visit of Egyptian President Anwar Sadat in Jerusalem and Israel. President Sadat took a bold step, he came to the Knesset; he came to Israel. He was welcomed by the entire nation. Since then, the peace treaty with Egypt has survived despite its ups and down. Today, Egypt and Israel, as well as other countries, are on one side of the barricade in a stubborn struggle against the terror of radical Islam in its various fronts. This contributes significantly to the security of Israel. And I hope that in the future it will also contribute to the expansion of the circle of peace.

“With regard to President Trump’s political plan, we heard plenty of speculations over the weekend; I am not planning to address them. I would like to say however, that my attitude towards this plan will be determined according to security and national interests of the State of Israel, and these were made clear to our American friends.

“Regarding infiltrators, we will discuss one of the aspects of this topic at the cabinet meeting. Our policy towards infiltrators is three staged: Stage one is halting. We built a fence and enacted laws that completely blocked the flow of infiltrators and today we have zero infiltrators. Second stage is removal. We removed approx. 20,000 out of the existing infiltrators using various measures. Stage three is increased removal. This removal is enabled thanks to an international agreement I achieved, which allows us to remove the 40,000 remaining infiltrators without their consent. This is very important. It will enable us later to make the ‘Holot’ facility unnecessary and to use part of the vast resources we allocate there for inspectors and increased removal. That is why we are succeeding here. But our goal is to continue removing significantly more then what we have until now.”

History notes that Sadat recognized after heavy military and economic losses in 1967 and 1973, that most of the Egyptian public had lost interest in fighting on behalf of the Palestinians. He believed his army had regained its honor by crossing the Suez Canal in 1973, which ultimately led to his decision that the time was ripe for a dramatic overture to the Israelis.

Begin’s recognition that a signed peace with Egypt was more important than Sinai — has provided Israel with 40 years of stability, by removing the military threat on its southern border. That peace has lasted through Sadat’s assassination, the removal of President Hosni Mubarak, the election of a Muslim Brotherhood government, and an effective return to military rule under current President Abdel Fattah el-Sisi.

Even though the peace is cold, and Egyptian civilians almost never visit Israel, the military and intelligence cooperation between the two countries has never been more close, friendly and effective.