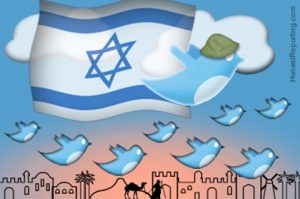 Jerusalem, Israel — January 4, 2019 … The Israel News Agency, one of the first English news sites on the Internet (1995), is proud to list those Jews who have the greatest, most far reaching and positive impact on Israel’s online image. Of all the media channels, Twitter is by far the most powerful media outlet as it directly reaches global business and political leaders, the media and the public.

@Ostrov_A – Arsen Ostrovsky – International Lawyer and Political Analyst  – among the most knowledgeable and aggressive. Not afraid to confront, correct – from the UN, Iran, PA, Hamas, IfNotNow, Jewish Voice for Peace to the many fake accounts created in Iran.

@IDF – Israel Defense Forces – If it affects Israel’s security – you will find it here – unless the operation remains secret or classified.

@sfrantzman – Seth Frantzman – Oped Editor – Jerusalem Post, researcher, photog., Phd, MidEast, Dir. MidEast_Center. Has bylines at TheNatlInterest, NRO, spectator – Perhaps one of the most knowledgeable, Jewish  journalists reporting on the Middle East. He has the details.

@michaeldickson – Michael Dickson – One of Israel’s most experienced advocacy professionals. Executive Director – StandWithUs. Michael represents the future of online digital PR for Israel. Has the facts, soundbytes – tireless Jewish PR advocate from whom many can learn from.

@dannydanon – Ambassador Danny Danon – Israel’s Permanent Representative to the UN – Not afraid to call it as it is. Fearless diplomat both on and off line.

@netanyahu – Benjamin Netanyahu – Prime Minister of Israel, Chairman of the Likud Party. Is there an Israeli Prime Minister who has more experience? Bibi provides for Israel’s security from both the heart and the mind. A Jewish leader that makes us proud.

@DavidHarrisAJC – David Harris – CEO, American Jewish Committee (AJC) – An American Jewish leader who places Jewish life above politics. A man who has stood and stands with the Jewish nation in the most courageous, intelligent manner.

@SachaDratwa – Sacha Rojtman Dratwa – Digital Advocacy at World Jewish Congress. Former Head of the digital media unit for the Israeli army. One of the most professional, potent digital PR assets in the global Jewish community.

@canarymission – Canary Mission – Exposing hatred and anti-Semitism on college campuses and beyond. If you’re racist, the world should know.

@HananyaNaftali – Hananya Naftali – One of the most powerful Israeli voices on Twitter reaching the global Christian community. A proud, diligent IDF reservist who  fights hard online for Israel. Addresses the Middle East conflict 24/7.