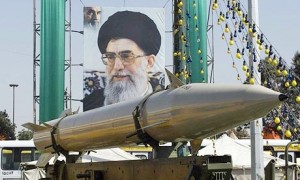 Jerusalem — March 15, 2015 … It doesn’t take a rocket scientist to figure out that if a Left wing government takes over in Israel, both war and economic chaos would result.

Members of Israel’s security establishment have told the Israel News Agency that Hamas, ISIS, Hezbollah and Iran are constantly looking for weaknesses in Israel’s infrastructure.

“They know that Netanyahu would never enter into negotiations for land as these negotiations would only be a long term, lethal ploy. A false narrative for which Jihad allows in it’s strategy for total conquest. Hamas, Hezbollah, ISIS and Iran have one and only one goal – the complete destruction of anything that represents the West, the complete destruction of democratic Israel.”

“If Herzog, Livni or Lapid get into power, who among our enemies will they negotiate with? Iran, ISIS and Hamas have made it very clear that they have one goal – ‘from the river to the sea’ – and if they can secure a few more kilometers of land from us, it will just make it that much easier for them to strike Tel Aviv, Herzliya, Ra’anana, Haifa and Hadera.”

“Will the prospect of war and war itself produce a more stable economy?,” asks Avi?

“The real tragedy here is that the Israeli people have one of if not the most experienced leader in global politics and military strategy. But they are being fed false hopes for a magical, Utopian, economic change by a One Voice, V15 campaign paid for and coordinated by Barack Obama. When the US Senate finishes its investigation into how the White House is using the US State Department to interfere in an Israeli election, we can expect a few to wind up in prison. But at what price? A war and broken economy?”

One of the main arguments of the Left against Netanyahu is a very false claim that the economy has been suffering under Netanyahu’s leadership.

It’s a lie. It’s actually a Nazi tactic. “If you tell a lie big enough and keep repeating it, people will eventually come to believe it.” Even if this argument is repeated over and over again, it remains erroneous. 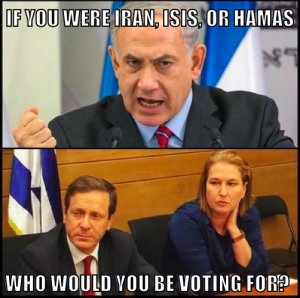 The economy has in fact never been better. Israel’s unemployment rate is one of the lowest in the OECD, and the rate of participation in the workforce keeps on growing. Both the median and the average salary, which were historically very low in Israel, have started rising.

Netanyahu has sought foreign investment in a variety of areas and the investors have poured billions of dollars into Israel – producing more jobs, more cash flow. Google, Apple, Facebook, Intel and hundreds of others in the StartUp Nation are today doing most of their R&D in Israel.The number of those in poverty, while still high, started going down under Netanyahu’s leadership. The inequalities in income distribution have also started to go down.Prices kept rising for years and recently they started going down. The Likud, led by Netanyahu, brought competition to the cellphone market, the airline, Internet and television industries, and to many more areas. The overly centralized economy is finally seeing some competition. If this is the case, how is it possible that the Left bases its whole political campaign against Netanyahu on such a blatant lie? There are two main reasons for this. First of all, the economy has various historic problems that the Likud under Netanyahu started to fix.

While we can see a real positive change due to Likud’s efforts, the economy is still not perfect. Even if prices started going down, they are still high. Even if the number of those in poverty started to go down, the number is still high. However, when looking at the effectiveness of a government, one cannot judge the government in a vacuum, but rather judge the direction the government is going in – a good direction or a bad direction? What is the current trend? Netanyahu’s government is clearly going in the right direction.

One would normally have to scratch their head to ask why so many are voting for “change” in Israel when this so-called change, a true weakness would invite a regional war and an economy that would start to look more like Greece. One must remember that the Left’s campaign slogans and door to door marketing is an imported product of Barack Obama. It’s really good marketing but when looking for the end result – just look at what Obama did to the US.

Sure – just give back more land and watch the missiles fly.
No one will have to worry about employment and a growing economy.
At least one campaign promise by the Left will be realized.