Jerusalem, Israel — May 21, 2018 … Speech made by Colonel Richard Kemp at the emergency session of the United Nations Human Rights Council on the deteriorating situation in Gaza on 18 May 2018.

Col. Kemp, decorated for his bravery with the UN Protection Force in Bosnia, tells the United Nations Human Rights Council: “Your failure to admit Hamas is responsible for every drop of blood spilt encourages their violence and use of human shields, makes you complicit in further bloodshed.”

“I commanded British troops in Afghanistan, Iraq, the Balkans and Northern Ireland and served with NATO and the UN. I’ve come straight from the Gaza front line to share my assessment.

Based on what I observed, I can say that everything we just heard here is a complete distortion of the truth. The truth is that Hamas, a terrorist organization that seeks the destruction of Israel and murder of Jews everywhere, deliberately caused over 60 of its own people to get killed.

They sent thousands of civilians to the front line — as human shields for terrorists trying to break through the border. Hamas’s goal, in their own words, was, quote, ‘blood… in the path of Jihad’. I ask every country in this Council: you have all been telling us that Israel should have reacted differently. But how would you respond if a Jihadist terror group sent thousands to flood your borders, and gunmen to massacre your communities?

Your failure to admit that Hamas is responsible for every drop of blood spilt on the Gaza border encourages their violence and use of human shields. It makes you complicit in further bloodshed.

Your failure to admit that Hamas is responsible for every drop of blood spilt on the Gaza border encourages their violence and use of human shields. It makes you complicit in further bloodshed.

If Israel had allowed these mobs to break through the fence, the IDF would then have been forced to defend their own civilians from slaughter and many more Palestinians would have been killed.

Israel’s actions therefore saved lives of Gazans; and if this Council really cared about human rights, it should commend the Israel Defence Force for that, not condemn them on the basis of lies.”

Richard Kemp has spent most his life fighting terrorism and insurgency, commanding British troops on the front line of some of the world’s toughest hotspots, including Afghanistan, Iraq, the Balkans and Northern Ireland. He is now a writer, a prolific journalist, media commentator and motivational speaker. He provides strategic consultancy services on leadership, security, intelligence, counter-terrorism and defence. 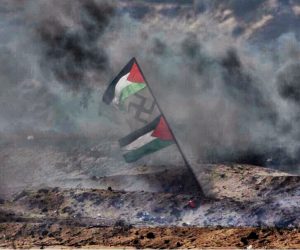 Jerusalem, Israel — May 9, 2018 … Somewhere in the United States, Europe and Asia, Mr. and Mrs. John Doe are waking up. They crawl slowly out of their beds, make their way to the bathroom, then to the kitchen to boil some coffee or tea. As they sip their Starbucks or Dunkin Donuts they glance down with eyes half open at the Sunday paper.

The front page has something to do with Trump, a volcano in Hawaii, North Korea then some local news about their school board and the opiate crisis. Minutes later they will reach the bottom of page 12 where a buried headline reads: “Dozens of Palestinians wounded in 6th weekly Gaza protest”.

But that same headline, seen week after week on page 10 or page 12 or page 14 remains deep in their conscience. It’s a headline that cries out that once again Israel is brutally attacking the poor, victimized Palestinians.

The story comes directly from the Associated Press which feeds thousands of global print, broadcast and digital media. AP reporter Fares Akram writes from Gaza City that black smoke from burning tires mixed with streaks of tear gas hover over the Palestinians, 70 of whom have been wounded by Israel fire.

There is no mention of Hamas until the last paragraph and that only comes with a brief description that Hamas is an “Islamic militant group”.

In reality, Israel once again is being forced to defend her civilian population on the southern border with Gaza and on her northern border with Syria and Lebanon against Iran and her US designated terror organizations Hamas and Hezbollah. But that totally escapes the reader. That reader could be a carpenter, a car salesman, health care worker, taxi driver, waitress, an officer in the Pentagon, a congressman or Senator.

Bottom line, Israel is once again losing the PR war.
The battle for souls and minds lost to a professional propaganda machine based in Tehran and outsourced to “peace organizations” in the UK and US.

Jews from London, Paris and Rome to New York, Toronto and Melbourne are again tragically on the defensive as they attempt to speak out proudly about Israel. Many truly don’t know what to say and some are even ashamed of Israel’s basic right to defend herself.

Any Jew who ventures to visit #GreatReturnMarch or #GolanHeights on Twitter will be greeted with a barrage of anti-Israel, anti-semitic comments, videos and photographs which depict suffering Palestinians. Much of the content is professionally staged.
It’s called Pallywood. But Mr. and Mrs. John Doe do not know that.

Yes, we have a few, strong, articulate online Jewish advocates coming from the IDF, the Prime Minister’s Office, the Israel Ministry of Foreign Affairs, the World Jewish Congress and even the Mossad – but it is not enough. It is not effective. We are heavily outnumbered on social media by fifty to one!

Israel will take every action to insure that innocent civilians in the region are not harmed.

Israel wants peace but will use every weapon it has to defend her civilian population.#Israel #Iran #Syria #Jihad #GolanHeights #IDF #Jewish #NeverAgain pic.twitter.com/YBBBMgMKph

Today it starts with the AP reporting from Gaza City. One cannot file an objective news story from Gaza City that is in any degree critical of the Hamas ruled government.
Do that and you will get a bullet to the head.

AP, which should have another correspondent reporting from the Israeli side – for editorial balance, is missing in action.
Is AP to blame?
Partly.

Can professional Jewish advocates i.e. – HonestReporting.com, Stand With Us or the Israel Project fix this?
No.

Mostly it is Israel’s negligence not to provide professional, basic media resources in a comfortable, air conditioned, computerized environment in Jerusalem and on the Gaza and Syrian borders. All it takes are a few IDF army tents with tables, chairs, electricity, Internet and coffee.

In the many years that I have worked as a journalist and or as a senior media consultant in Israel – we have always had a professional media center in operation to provide real time, 24/7 information to the global media during military operations.

When public opinion has a direct impact with lives on the ground there is no debate. The Prime Minister’s Office needs to immediately coordinate a media center(s) with the Ministry of Foreign Affairs, the Israel Defense Forces and Israel Government Press Office to provide access to both the Gaza and Syrian border, photographs, news releases and spokespeople to answer questions.

This is crisis communications, reputation management 101.

In some minds in Jerusalem, controlling the narrative is solely defined as opening fire to defend your civilian population.

With others it takes the shape of educating your fellow Jews, Western democracies, the UN and the International Criminal Court in The Hague of the defensive action Israel is taking to preserve her existence.

Without this critical, real time flow of accurate information coming from our public affairs experts in Jerusalem, that AP story will slowly transcend into cancerous anti-semitism.

Israelis are Jews and Jews are shooting at “innocent Palestinians”.
Jews are once again creating suffering in the world. Forget that Israel was in Haiti, Nepal, Japan and on the Syrian border with field hospitals. Forget every medical, tech and humanitarian achievement Israel has created in saving thousands upon thousands of lives.

Twitter and Facebook cannot and will not replace an active, government sponsored media centers with computer terminals, coffee and live interviews with articulate, professional spokespeople who speak English, French and Spanish.

That the Giro D’Italia bicycle race warrants a media center in Jerusalem and thousands of Iranian paid, Hamas inspired rioters attacking our southern border does not – truly boggles the mind.