Jerusalem — December 28, 2014 … Part of the following was communicated by the Prime Minister’s Office to the Israel News Agency.

Prime Minister Benjamin Netanyahu, today, made the following remarks at the start of the Cabinet meeting:

“In recent weeks we have seen a stepped-up Iranian effort to intensify terrorist actions in Judea and Samaria. None other than the Palestinian Authority ambassador in Teheran said that he was enthused by Iranian ruler Khamenei’s instructions to send weapons to the West Bank and he added, and I quote, ‘The Zionist regime is an aggressive cancerous growth which, sooner or later, must be eliminated.’

“Now I emphasize, it was not a Hamas man who said this, it was the Palestinian Authority ambassador in Teheran. Now what is the UN doing in response?

“Instead of dealing with this incitement they are giving it an honored place, the same incitement that has led to the recent terrorist attack, and they are also moving forward on a unilateral Palestinian proposal to try and pass a decision in the Security Council, the purpose of which is to bring about a forced settlement that would establish here a second Hamastan and would endanger our security.

This is the same UN the Human Rights Council of which passed dozens of decisions this year against Israel, one decision on Iran and one decision on Syria. We will continue to insist on our truth and we will also continue to vigorously rebuff attempts to force terms on us that would endanger our security and our future. We expect national unity on this national issue.” 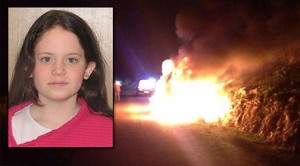 Last week, 11-year-old Ayala Shapira,  was seriously wounded in a Palestinian firebomb terror attack on her car near Maalei Shomron in the West Bank. Her father suffered minor burn injuries.

The young girl suffered third degree burns to over 50 percent of her head and upper body. Working with IDF medical evacuation teams the girl was then transported to the burn center at Israel’s Tel Hashomer hospital.

IDF and Israeli security forces caught and arrested those responsible.

The two Palestinians who were arrested on perpetrating the West Bank firebombing attack  have admitted to the crime, according to the Shin Bet.

The two, one of whom is a 16-year-old minor, admitted to their role during questioning, the Shin Bet security services said. The two said that they left the Palestinian village of Azun to throw firebombs at vehicles on the road to the Ma’ale Shomron settlement.

Another ten suspects are in custody on suspicion of involvement in the incident.

“The two waited alongside the road for vehicles to pass, then lit their firebombs and threw them at the vehicle that got hit and went up in flames as a result,” read a Shin Bet statement. “Later, the two fled, returning to Azun, and were then brought in for questioning that night by the Shin Bet, following intelligence efforts to identify those involved in the attack.”