IsraAid is among the first humanitarian organizations to
arrive whenever disaster strikes around the globe.

New York — August 29, 2017 … From Haiti and South Sudan to Japan and Kenya, IsraAid has been among the first to be on the scene when disaster strikes.

Today, a team of 10 IsraAid professionals are about to arrive in Texas. These non-governmental volunteers will set foot in Houston to assist with disaster management and provide mental health  and engineering expertise. They will focus on coordination of relief work and provide basic needs including stress relief activities and recreation for those impacted by the disaster.

“The biggest challenge is always coordination in situations like these,” said IsraAID co-director Navonel Glick.

Glick said the IsraAID team will work with state authorities and aid groups including those of the Jewish Federation in Houston as well as others connected to Jewish communities in the area, he said.

Up up and away to help out in Houston! #HarveyFlood #Houston #Harvey #Psychotrauma #CrisisResponse pic.twitter.com/2vCqzIa3OL

“People need help on the ground. They need to be able to wrap their minds around what was lost and they need assistance figuring out how to cope and where to go from here,” said Dov Maisel, Director of International Operations for the IRC and Vice President of United Hatzalah. “That is the biggest challenge currently facing all Houston residents who have suffered during Hurricane Harvey.”

In order to help people impacted psychologically by the hurricane, the IRC is utilizing the Psychotrauma and Crisis Response Unit of United Hatzalah, a volunteer-based emergency medical services organization based in Jerusalem with branches around the world.

The hurricane turned tropical storm has ravaged the Texas coastline since Friday and has claimed at least 11 deaths. The National Weather Service and Emergency management services predict the situation will only get worse in the hours ahead as several more inches of rain is expected from Houston to New Orleans.

“The US Coast Guard is continuing to receive upwards of 1,000 calls per hour,” Coast Guard Lt. Mike Hart said on Monday. The Coast Guard rescued more than 3,000 people on Monday, he said.

Over 9,000 Hurricane Harvey survivors are being housed at the Houston Convention Center.

Houston officials will not ask for immigration status or documentation from anyone at any shelter, according to tweets in English and Spanish from the city’s verified account.

In Dallas, state and local officials operating with the Red Cross are preparing to open a mega-shelter at its downtown convention center. Authorities aim to open the Kay Bailey Hutchison Convention Center Tuesday morning.

“For the most vulnerable groups, notably children and the elderly, time is of critical importance; the longer these groups are forced to remain in shelters, the higher the chance of long-term mental health problems such as Post Traumatic Stress Disorder (PTSD), a disorder that can have a debilitating and long-term impact.”

Hartford, CT — August 20, 2017 … “The Ku Klux Klan, White Supremacists, and Neo Nazi’s should be a thing of the past,” said Senator Richard Blumenthal. This gathering was the latest showing of anti-hate rallies taking place in response to Charlottesville across the United States.

Joel Leyden, who runs “Jews Against Hate”, created a change.org petition at StopNeoNazis.com. If enough people sign it, a petition will be sent to Congress asking them to designate Neo-Nazis and the Alt-Right as terror organizations.

“We have a very real threat facing America and that evil threat is hate,” said Joel Leyden of the Interfaith Coalition Against Racism.

To combat that fear Joel Leyden joined forces with Zahir Mannan, of the Baitul Aman “House of Peace” Mosque.

About a month ago, they met as both surveyed a Jewish cemetery which had been vandalized in Hartford. That’s when the idea of a new group was born.

The Interfaith Coalition Against Racism brings together people of various religions with a mission of promoting tolerance over hate. It’s an ideal that seemed more urgent after the deadly violence in Virginia last weekend.

“There are a lot of things that we as a humane, civilized society can do in terms of standing up against real threats,” Leyden said.

“This is not against a particular person or really any group but it’s against injustice and hatred in general,” Mannan said.

The Interfaith Rally Against Racism took place at the Connecticut State Capitol Sunday. 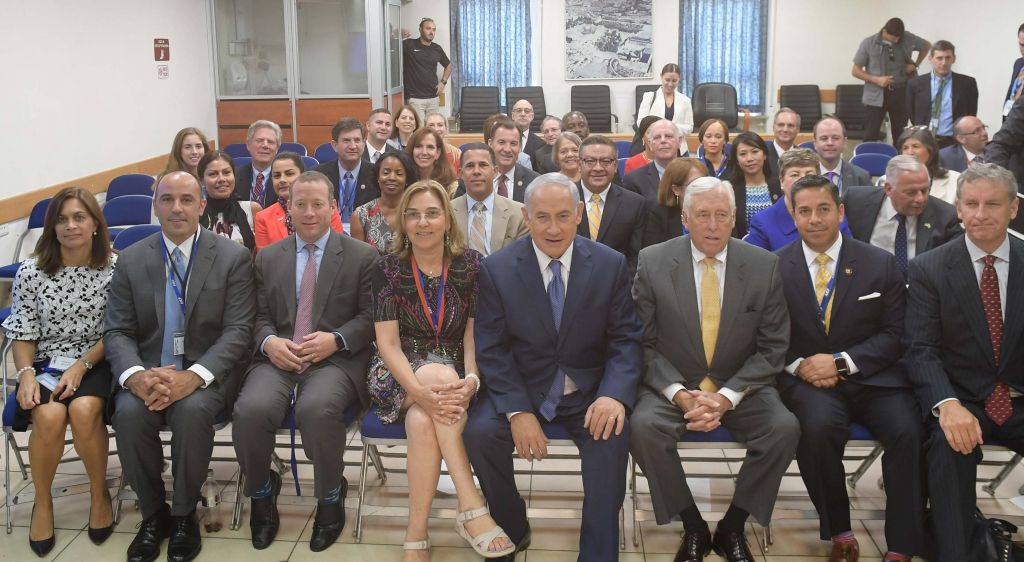 Rep. Steny Hoyer, the House Minority Whip, told reporters that there was no lingering bitterness among Democrats towards Israel over Netanyahu’s congressional speech against the 2015 Iran nuclear deal. Hoyer asserted that “all of us together support Israel,” whether or not they agreed with the speech. He explained that he objected to the nature of the invitation to Netanyahu, which was not done in a bipartisan fashion, and not Netanyahu’s decision to speak.

“I thought he spoke very well. I stood and clapped for things I supported, as others did,” Hoyer said of Netanyahu’s speech. “But the essence is not personalities. Democrats are very supportive of Israel and that is our focus and continues to be our focus.”

When asked about Democratic support for Israel, Hoyer responded that no Democrats opposed a recently passed bill that imposed new sanctions on Iran, and that “the parties are very united, and the fact is that the parties are speaking with one voice.”

While Democrats and Republicans are divided over many issues, Hoyer noted, “when you have votes regarding Israel’s well-being and safety, they are overwhelmingly bipartisan.”

Hoyer, who is leading a group of Democratic congressmen on his 15th visit to Israel, said that he and House Majority Leader Kevin McCarthy (R – Calif.), who is leading a Republican delegation, will get together to demonstrate the bipartisan nature of American support for Israel. Both delegations to Israel are sponsored by the American Israel Education Foundation, which is affiliated with the American Israel Public Affairs Committee.

Hoyer and the Democratic group met with Netanyahu on Monday, while the Republican group is scheduled to meet the prime minister on Wednesday.

“We have made a point to make sure we have an overlapping time here in Israel together, Republicans and Democrats. Because this is not a partisan issue. This is a bipartisan issue,” McCarthy said.

“Some of us are Democrats and some of us are Republicans. But we’re not here as Republicans and Democrats. We’re here as Americans who support Israel’s security, its sovereignty and the safety of its people,” Hoyer said before approximately 50 members of Congress.

July 31, 2017 — Jerusalem, Israel … Yad Vashem Holocaust Memorial in Jerusalem will sign a Memorandum of Understanding (MOU) with the Ministry of Education from Serbia today, codifying the working relationship that Yad Vashem, the World Holocaust Remembrance Center, shares with the Serbian government.

The agreement was signed in the presence of Assistant Minister of Education Dr. Aleksandar Pajic as well as Serbian educators participating in a seminar at Yad Vashem’s International School for Holocaust Studies.

Over many years, Serbian teachers have participated in some of the hundreds of annual international workshops and educational seminars Yad Vashem has conducted for teachers and community leaders from all over the world.

Yad Vashem’s International School for Holocaust Studies is known the world over for its unique approach towards Holocaust education.

“We have governmental partnerships with more than 50 countries around the world and are thrilled to officially add Serbia to this prestigious group.”

Prior to this agreement, those educators from Serbia who participated in seminars at Yad Vashem did so in an unofficial capacity. Now Serbian teachers will receive full accreditation for their participation and the number of seminars offered to them is set to increase.