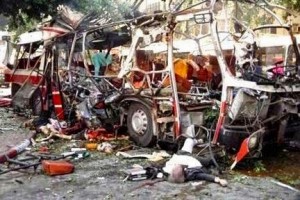 Hamas, which blows up buses and restaurants,
is not considered a terror organization by the EU.

Jerusalem — December 17, 2014 … Israel Prime Minister Benjamin Netanyahu issued the following statement on the decision of the General Court of the European Union to remove Hamas from the European Union list of terrorist organizations:

“We are not satisfied with the European Union’s explanation that the removal of Hamas from its list of terrorist organizations is a ‘technical matter’. The burden of proof is on the European Union and we expect it to put Hamas back on the list forthwith given that it is understood by all that Hamas – a murderous terrorist organization, the covenant of which specifies the destruction of Israel as its goal – is an inseparable part of this list. We will continue to fight Hamas with strength and determination so that it never achieves this goal.”

Upon meeting US Senator-elect Joni Ernst in Jerusalem, Netanyahu stated:

“The friendship of the people of the United States of America stands in sharp contrast with what we see unfortunately in Europe.”

“Today we witnessed staggering examples of European hypocrisy. In Geneva they call for the investigation of Israel for war crimes, while in Luxemburg the European court removed Hamas from the list of terrorist organizations, Hamas that has committed countless war crimes and countless terror acts.”

Netanyahu concludes: “It seems that too many in Europe, on whose soil six million Jews were slaughtered, have learned nothing. But we in Israel, we’ve learned. We’ll continue to defend our people and our state against the forces of terror and tyranny and hypocrisy.”

“Thanks to this decision we as European Jews, who Hamas openly declares as targets for annihilation, feel less secure,” Moshe Kantor, the President of the European Jewish Congress, said in a statement following the verdict. “We have reached a new low in moral relativity if an organization explicitly dedicated to the destruction of a nation and people, which actively target and commit terrorist acts against civilians, is no longer considered a terrorist organization,” he said, citing the Hamas charter.

“This is an open invitation to the Hamas terrorists to continue their attempts to murder Jews with impunity and is basically a prize for their rocket campaign against Israeli civilians,” said the Simon Wiesenthal Center’s Efraim Zuroff.