The bombs may not be real, but the fear is.

New York, NY — January 18, 2017 … The doors are always kept open. No one standing over them. All may come and go. It’s the Jewish tradition of “welcome the stranger”. But this practice, this age old honored Jewish value may now very well change in Jewish facilities throughout the United States.

It is evening now in New York, Miami, Chicago and Los Angeles. Since sunrise there have been at least 28 bomb threats at 28 Jewish facilities in 17 states.

At least 28 phone calls placed by a female this morning informed those at Jewish Community Centers that there was a bomb in their building. Hundreds of men, women and children quickly evacuated these buildings as police and FBI rushed in.

Did American Jews really think that their tranquility would go unnoticed by those who hate them? That soft targets are exactly that – just waiting for a bomb or gun to happen. The rude awakening is here.

Good morning American Jewish brothers and sisters. Welcome to how we live and work in Israel. Only difference – we are prepared and as such we do not fear entering our shopping malls, beaches, restaurants and holy places.

The bomb threats that were called in today and last week when 16 Jewish facilities were warned of explosives that were ready to go off more than likely was not the work of Islamic Jihadists. They don’t operate like that. Jihadists don’t provide telephone calls that warn their victims. They simply go about their mission to murder as many as they can and praise Allah.

The pattern here of creating fear among Jewish communities most likely comes from Neo-Nazis. For the past month they have been playing mind games with the citizens of Whitefish, Montana. Making online threats against their Jewish residents and proposing an armed march through the ski town’s quiet, country streets.

Do American Jews truly have much to fear? Not really, if they take a few simple steps. Measures that we live by in Israel that are not so bad – in fact they truly provide a sincere feeling of security. 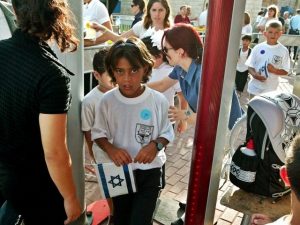 Jewish facilities throughout the US need to buy walk through metal detectors and place them and an armed security guard at the entrance of their buildings.

There are many other security measures that can be taken, but it’s not for the open Internet. But let’s start with metal detectors and armed guards.

Let’s start with creating a “sterile and safe environment” for the Jewish children who attend Hebrew school, Temple services and swim and play tennis at the Jewish centers.

Let’s provide American Jewish children and their parents with real security that will reduce if not eliminate any fear and anxiety they may have experienced today.

The days of welcoming the stranger must now transcend to where both you and the stranger will feel more secure, more relaxed and able to focus on your children’s smiles and not their tears.

The real upside over today’s bomb threats were that they were a warning.
If we ignore these warnings, the next bombs could be very real.

Whitefish, Montana — January 18, 2017 … Following Neo Nazi, White Supremacy threats of planning an armed march through the streets of Whitefish, Montana, Jews Against Hate are preparing a petition for Congress that would designate all Nazi groups as terror organizations.

The British Parliament recently passed into law designating a neo-Nazi group to be labelled a terror organization and banned in a landmark first for the UK.

The order proscribing fascist group National Action was submitted before Parliament three weeks ago. It was the first time membership of a far-right group has been outlawed in the UK.

The Jews Against Hate petition, which aims to eliminate Nazi groups from using “free speech” to incite hate and violence reads as follows:

“As you read this petition, American Nazis are terrorizing Jewish families and their friends in Whitefish, Montana. They have threatened to bring automatic weapons to a planned march sometime in January or February.

The city of Whitefish argues that they will have to allow these racist Nazi thugs into their town based on “free speech”. Incitement to murder and or harm Jews and other minorities is not free speech.

The Jewish families of Whitefish and the businesses that they are associated with have all been targeted online with death threats. Why do we allow these death threats and criminal harassment to go unpunished?

Have we not learned anything about Nazis?
Have we forgotten the brutal history of the Nazi Party – 11 million murdered in World War Two as the result of racist hate?
The Nazis of 2017 have the same agenda as the Nazis of 1938.
In addition, the Nazis of 2017 have aligned themselves with the Hamas Islamic terror organization (Jihad) to achieve their global and domestic goals.

We recognize that many did not live through nor experience the original Nazi genocidal era. So we ask you to think of the evil of ISIS and the efforts that modern Nazis are making to associate with them and Hamas.

We are taking this action as the United Kingdom has recently declared the Neo-Nazi, anti-semitic group “National Action” as a terror organization under the Terrorism Act 2000. It is now a criminal offense to recruit for, be a member of or in any way support a Neo-Nazi group including displaying Nazi or Nazi supporting flags, posters or banners.

This present and clear danger to the welfare, protection and safety of American citizens needs to be addressed without delay.”

The Jews Against Hate petition can be found here:  www.NaziTerrorismPetition.com 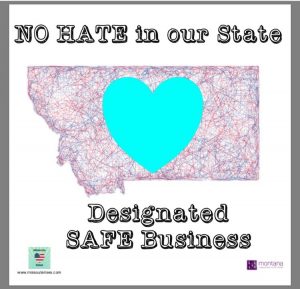 Whitefish, Montana — January 10, 2017 … Montana shoppers will soon begin seeing posters in the windows of stores that want to be recognized as safe places thanks to cadre of volunteers and the Missoula Downtown Association.

A human rights group of Missoula residents who were spurred by Nazi, anti-Semitic leaflets to react with love and protection, created the posters to denote stores where store owners have pledged to not tolerate hateful language or actions.

The group is standing in solidarity with the residents of Whitefish, Montana and has already begun distributing posters there. The group’s leaders have also been posting the signage on social media and offering posters for free to any business owner who wants one.

“Because of the climate after the Presidential election, it has become extremely important for people in Western Montana to know that we support inclusion and diversity,” said the group founder. “We will be vocal and stand up against hate. If someone needs help, you have our help.”

The idea for the group was a reaction to the disappointment and helplessness many felt after Donald Trump was elected in early November.

Throughout the election, Trump used negative language that targeted Hispanics, Women, Muslims, POW’s and the disabled.

Missoula Mayor John Engen is planning to issue a mayoral proclamation rejecting hate and promoting inclusion. The group encourages anyone who is the recipient of any flyers, literature, phone calls or comments that make them feel unsafe based on religion, gender, sexual orientation, race or ability to report the incident to Missoula City Police or Mayor Engen. 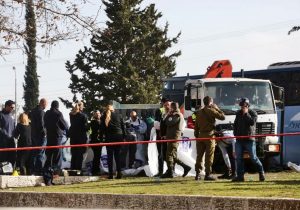 “We in Jerusalem have just experience an unprovoked terrorist attack, a murderous attack that claimed the lives of four young Israelis and wounded others.”

Netanyahu concluded: “We know the identity of the attacker, and according to all the signs, he is a supporter of ISIS – the Islamic State. We can only fight it together, but we have to fight it, and we will.”

Three IDF female soldiers and one male soldier, all in their early 20s, were declared dead at the scene.

“This is a very difficult attack,” he said. “I arrived with other ZAKA volunteers and the scene looked like a battlefield. Many injured lay on the grass, some of them were still trapped under the terrorist’s truck.”

ZAKA Jerusalem Operations Commander Meir Akar said a crane from the firefighters was used to lift the front part of truck to free those trapped underneath.

“To our dismay, there is no limit to the cruelty of the terrorists who are willing to use any means possible to murder Jews and to damage the life routine of Israel’s capital,” said Barkat.

“Those who incite and fan the flames of terror must pay a heavy price,” he added. “I call the residents of Jerusalem and the country at large to be alert, and despite this hard terror attack, to carry on in your daily routines, and do not let terror win.”

Israel Defense Minister Avigdor Liberman said that Sunday’s truck-ramming attack in Jerusalem was not related to the issue of Israeli settlements, rather by the mere fact that “we are Jews and we live here in Israel.”

“There was no other reason and no need to look for an excuse – not Jewish settlements and negotiations but an attack inspired by ISIS.”