Jerusalem, Israel — June 29, 2018 … Last night, during a special IDF operation, humanitarian aid was transferred to Syrians fleeing hostilities and who are presently living in tent camps throughout the Syrian Golan Heights.

The IDF has provided life-saving humanitarian aid to Syrian civilians through “Operation Good Neighbor” for several years, as a good-will gesture, while maintaining a policy of non-intervention in the Syrian conflict.

As part of the operation last night that took place over several hours, 300 tents were transferred to Syrian civilians along with 13 tons of food, 15 tons of baby food, three pallets of medical equipment and medicine and 30 tons of clothing and footwear.

Thousands of Syrian civilians are presently living under poor conditions in these camps near the Israeli border, often lacking access to water, electricity, food, and other basic necessities. 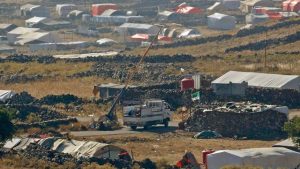 The UN’s Syrian envoy Jan Egeland said Thursday that humanitarian shipments to Deraa and the southern region of Quneitra have been disrupted since June 26.

“The extremely effective lifeline from Jordan across the border has been discontinued due to the fighting in recent days,” Egeland told reporters. 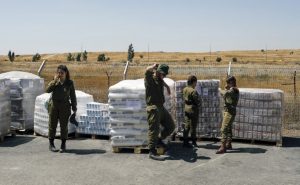 Israeli soldiers stand next to food supplies being prepared for Syrian refugees at an army base in the Golan Heights.

Assad’s offensive in the southwest has been backed by air strikes and shelling that have killed 96 civilians since June 19, the Syrian Observatory for Human Rights war monitor said, including 49 on Wednesday and Thursday.

The IDF states that it is closely monitoring events transpiring in southern Syria and is prepared for a wide variety of scenarios, including additional humanitarian aid distribution to Syrian men, women and children. 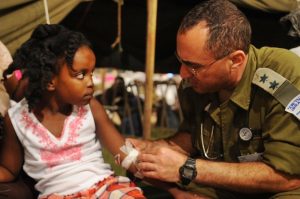 Israel is renowned for responding to humanitarian crises in Gaza and distant locales such as Haiti, in the aftermath of the devastating 2010 earthquake, Nepal, and Japan, following the Fukushima nuclear meltdown.

IDF humanitarian aid missions have helped thousands around the world for over 26 years, with 15 aid missions to countries struck by natural and man made disasters. 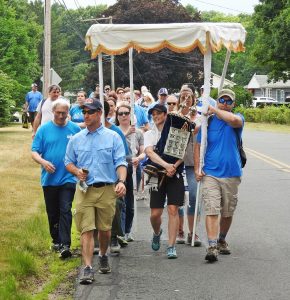 South Windsor, CT — June 25 … “When a synagogue needs to close its doors, it is never good.

However, we found a way to make the most and bring honor.
After an emotional open house and last Shabbat service, Temple Beth Hillel joined Congregation Beth Ahm and set out to carry the Torah the ten miles from Windsor to South Windsor.  We carried it under a chuppah (wedding canopy).
Along the way, names of the Torah portions were put on signs.  At each new portion, we gathered the group, read the name and called “tekiya” to prompt the shofar carriers to blow.
Churches rang their bells as we passed. 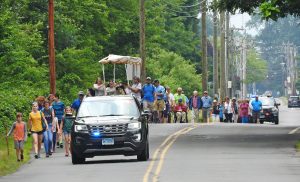 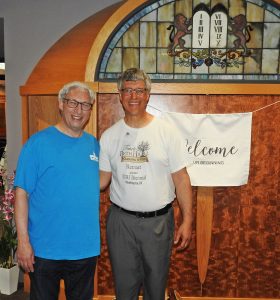 Rabbi Alan Lefkowitz and Rabbi Jeffrey Glickman take a well deserved rest after walking from Windsor to South Windsor, CT in a ten mile Torah march.
When we arrived at Temple Beth Hillel, there was a Klezmer band and we shifted into wedding mode.  The parade circled the parking lot 7 times, then the Torah was handed from person to person, across the threshold and into the sanctuary where a bar mitzvah read the portion of the week, “Ma tovu ohalecha Yaakov…” “How good are your houses…” the first lines a traditional Jew recites when entering the synagogue in the morning.
“We have just carried the Torah 10 miles.  It was a challenge, but not a burden.
Congregation Beth Ahm has carried Torah for several decades.  It was a challenge, but not a burden.  When a major project has ended, we recite, chazak, chazak vnitchazek, It is strong, strong and may we be strengthened by it.  The emotional walk has ended, as has the glorious decades of Jewish spiritual presence in Windsor. 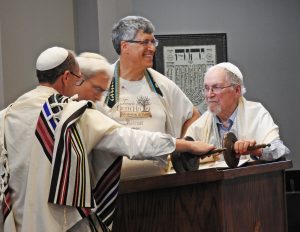 Rabbi Jeffrey Glickman serves as spiritual leader at Temple Beth Hillel, on Baker Lane here in town, where he teaches “This is a house of prayer for all peoples.” Since arriving in South Windsor in 1995, his commitment of uniting diverse people remains central to his values. Rabbi Glickman is the current president of the Greater Hartford Rabbinic Association. 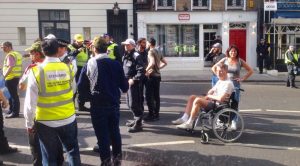 June 11, 2018 — London … A Jewish lawyer, Mark Lewis, who halted a rally for the terror group Al Quds on the streets of London for an hour by refusing to move his wheelchair told the Israel News Agency that he did so to protest against Hezbollah flags and “inflammatory rhetoric”.

“My friend Mandy was there too. I didn’t care if others joined. At first there were others but although the Police forced other pro-Israel protesters to the side, I refused to move and they didn’t know what to do. I was ready for violence. I might be disabled and can hardly lift my right arm or leg. My mind is ready to fight back. If I got hit they would suffer more.”

Their march towards Downing Street was due to begin at 5 pm but demonstrators were unable to progress after Mark Lewis, who suffers from multiple sclerosis (MS), refused to move.

The lawyer attended the counter-demonstration with a contingent from the UK branch of the Herut political party, a right-wing Zionist party founded by Menachem Begin.

“The problem is the government and the Home Secretary for allowing terrorists on our streets. I take exception with the Hezbollah flags and the inflammatory speeches calling for the destruction of a country,” said Lewis.

“Hopefully we got the message across. Enough is enough – we need to ban terrorists marching through our streets. 2018 has to be the last year, otherwise there will be an even bigger counter-protest next year.”

Lewis is a very well known, respected lawyer in the UK.

He started the “phonehacking” cases against Newscorp and represented the Dowler family in the case that closed the News of the World, the biggest selling newspaper in Europe.

On a Jewish level he was a director of the UKLawyers For Israel conducting much “Lawfare”.

Lewis, who is 53, has had MS for 30 years. Last year he was on a medical trial at Hadassah Ein Kerem Hospital in Jerusalem and the subject in a documentary on channel 4 UK might that could be found on a YouTube search for a miracle cure.

Lewis is known for breakthrough law suits and standing up to bullies. According to a PBS documentary he says:  “I don’t have the fear gene”.  I have been profiled in the New York Times and Wall Street Journal as well as many other papers from several countries.

Lewis advises several Jewish organisations and newspapers. And does so often behind the scenes.

As a teen he was active in BBYO (AZA) was a guide on two Israel tours and a counsellor at New Jersey Y Camps.

“There is no obvious reason why the UK government hasn’t proscribed Hezbollah, says Lewis.

“The UK government is quite successful at stopping a lot of terrorism but is under resourced and some terrorism gets through. There is more to do. The Foreign Office is notoriously anti Israel and has a blind spot where Hezbollah is concerned splitting it into a “terrorist wing” and a “political wing” TW is banned PW is not so marchers under the AK47 yellow flag claim to be political.”

“I describe myself as an “unapologetic Zionist”. I do not fetter myself with the organisations that spend time trying not to upset people,” says Lewis.

“The Police tried to do their job and I did mine, arguing with them and not giving an inch. It helped that in the phonehacking scandal I forced the Commissioner of the Metropolitan (London) Police to resign and sued the Police for libelling me.”

“Amazingly, a little knowledge of criminal law and the rights of protesters baffled officer after officer who challenged me.

The saga which led to the bizarre situation that we were threatened with arrest to protect the rights of those waving the terrorist flag of Hezbollah adorned with an image of an AK47 gun was a farce but the fact that the Al Quds rally itself was allowed was not funny.”

Lewis says: “As a community we know that HM’s Opposition is a problem but HM’s Government is not much better. It was the Government that allowed this march to take place.

Seriously, the Police enforcing the will of the Home Secretary saw a wheelchair as a greater threat than a machine gun.

Before she was Prime Minister, Theresa May as Home Secretary said that the Al Quds march should be banned. She seems not to have passed the message on to her successors.

The stand off was not planned. I had moved to the route where the marchers had planned to go thinking that a large number of people would do the job that the Government should have but the Police following orders from on high moved us all away. Mandy and I refused to go.

A civilian support worker told me that I had to move. My lawyer’s mind kicked in, and I asked why? He walked away. 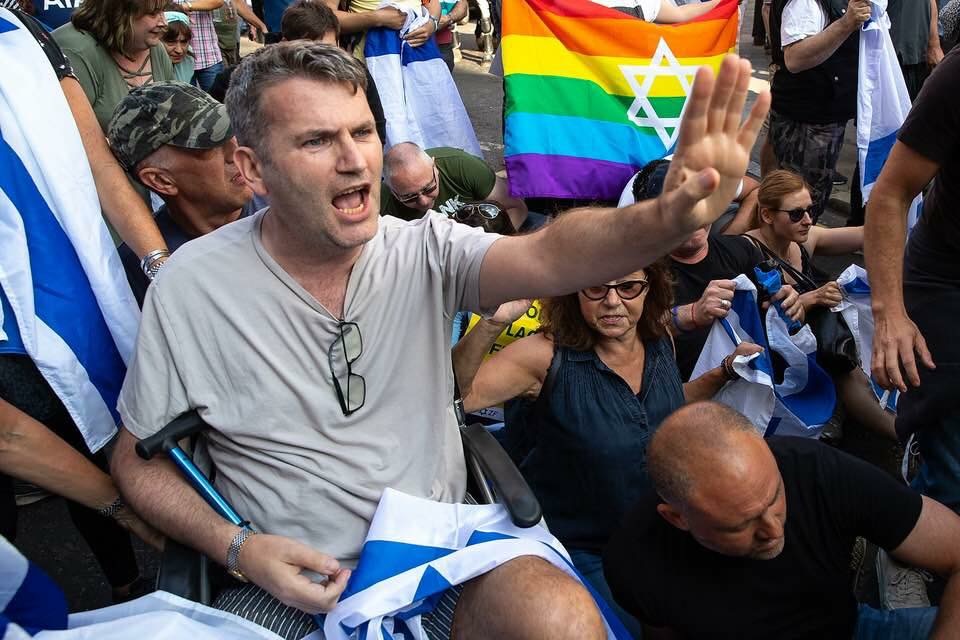 Two officers came and told me that the marchers would walk around me and they “could not guarantee my safety”. “That’s ok” I said, “I never asked you to, I’ll take the risk”. They walked away.  Two more took over and said they would stand by my side.

At that point, the IHRC “Deputy Chief” according to his coat, approached the Police “if he doesn’t move, we won’t”. The officers looked at me, and much to the amusement of one of the officers, I replied that “we’ve got a deal, I’ll stay if they stay, I’m not in a rush.”

Another officer then told me that I had to move and that the Police had an order closing the street. I asked: “Can I see it?” He shrugged and walked away mumbling that it was in a van somewhere.

After 45 minutes, a different officer told me that she would arrest  us. I pointed out that the Police had said we could stay and so we were doing nothing wrong. She then went away and then came back to withdraw my permission at which point she warned me that we would be arrested. The Police had chosen the side of the terrorists.

And so it was that after nearly an hour a Police Support Officer moved me down the street. Farcical as the stand off was, none of this should have happened.”

Lewis concludes: “I have always fought anti-semitism and always will. I plan to make Aliya (immigrate to Israel) soon. I think Europe is over for Jews, we are fighting a losing action.” 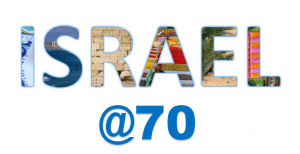 New York — June 2, 2018 …  Local and international officials are expected to join over 40,000 marchers from more than 250 organizations, hundreds of thousands of spectators at the 2018 Celebrate Israel Parade on Sunday, June 3, from 11 a.m. to 4 p.m. along Fifth Avenue in Manhattan, from 57 Street to 74 Street.

The giant parade will include 15 world-class marching bands and more than 30 floats.

This year’s creative theme for marching groups and floats is “70 and Sababa (70 & Awesome)!” in honor of the 70th Anniversary of Israel.

The event sponsored by the Consulate General of Israel in New York and the Ministry of Culture and Sport will feature singer Shiri Maimon and DJ Omri Anghel.

The party will begin as Times Square’s famous billboards transform into a homage to Israel’s heritage of innovation and its miraculous first seven decades.

Many celebrities including Mayim Bialik, (CBS-TV‘s The Big Bang Theory) will be featured on the famous Times Square screens and will share their enthusiasm for the country.

The whole Square area will transform into a giant Israeli block party for New Yorkers, Israelis and international tourists alike to celebrate together.

If you can’t be there in person, you can attend virtually. CBN News will be streaming the event on CBNNews.com and on the CBN News Facebook page beginning at 8:00 pm Eastern time Sunday.

Join the conversation by following the event using the hashtag #Israel70TimesSquare.