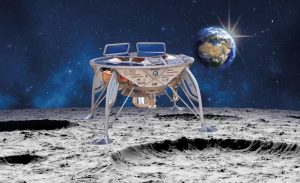 Jerusalem, Israel — February 19, 2019 … After a night of drinks in the small town of Holon, just south of Tel Aviv, came a fascinating, romantic idea by three young Israelis: launch a spacecraft and land it on the moon.

Yonatan Winetraub, Yariv Bash and Kfir Damari – were at a bar enjoying a few hours of friendly chat. They made for an interesting and enlightened mix: a space engineer, a cyber security expert and a drone maker.

One decade later, their dreams of space flight – of a spacecraft being launched from the earth to the moon bearing the Israeli flag is becoming a reality.

Their spacecraft, Beresheet (Hebrew for Genesis) will aim for the moon on February 22 as it lifts off from the Kennedy Space Center in Florida.

The star trek adventure will make Israel only the fourth country to ever successfully land on the moon – after the U.S, Russia and China. In addition, it will mark the first-ever privately funded trip (not paid for by a government) to land on the lunar surface.

Here are some fast facts on this historic space mission:

Beresheet is the first spacecraft to land on the moon as a result of a private
initiative, rather than a government.

Beresheet is the smallest spacecraft by weight.

It was developed and constructed at a cost of only $100 million, compared to
billions of dollars in similar projects.

It will make the longest journey until landing on the moon, 6.5 million
kilometers.

“Eight years ago we ventured on this journey that is now nearing completion in about two months when we land on the moon,” said Morris Kahn, president of SpaceIL.

“We are making history and are proud to be part of a group that dreamed and
realized the vision that many countries in the world share, but so far only three have
realized. We presented the Beresheet; project as a gift to the President of Israel, where it was declared a national project. I couldn’t be prouder than to give this gift to the people of Israel and make it part of the Israeli ethos of technology, daring and a generous dose of nerve.”

Ido Antebi, CEO of the SpaceIL NGO said “Our journey to the moon is full of challenges, which makes our task extremely complex. Every step we take successfully outlines the way to the next successful one until the landing on the moon. For many months, our teams and IAI’s were engaged in testing the spacecraft and its systems,
conducting complex experiments and preparing for every possible scenario of the
mission, whose success will make Israel an extremely proud nation.”

Nimrod Sheffer, CEO, Israel Aerospace Industries added: “The cooperation with SpaceIL is an example of the amazing achievements that can be attained by the State of Israel and a symbol for the path Israel has walked since its establishment. Most
importantly, it illustrates the loftier achievements that can still be achieved – the
know-how, the capabilities and the human capital are all here. The journey to the
moon is fraught with challenges, but thanks to the professionalism, determination
and faith of all the partners in the project, an Israeli spacecraft will be launched to the moon in the coming days. IAI together with our partners at SpaceIL will continue
to do everything necessary to ensure the success of this mission.”

The SpaceIL and IAI partnership said that the launch of the Israeli spacecraft “Beresheet” will take place on February 22, 2019. The night between Thursday and Friday at around 03:45 a.m Israel time. (US East coast time 21/2/19 around 20:45).

Once launched, the spacecraft will begin a long and complex orbit. The launch is
expected to take place at about 03:45 a.m. Israel time, when the Falcon 9 rocket is
launched out of the atmosphere from the Cape Canaveral launch site. About 32
minutes later, the spacecraft will separate from the launcher. A few minutes after
this critical point, assuming it takes place as planned, we expect to receive
preliminary indications from the spacecraft to the control room located in Yehud,
Israel. This will let us know the spacecraft is on its way. A few minutes later, the
spacecraft’s landing legs will open and we will then begin a series of tests of all the
spacecraft’s systems to ensure they have successfully survived the launch and are
working well in space.

The main challenges in the journey to the moon:

There are five major challenges of the spacecraft’s journey to the moon:
First, the launch is fraught with risks in and of itself.

Second, locating the spacecraft and contacting it over the vast distance to the moon is very intricate.

Third, the spacecraft’s durability under extreme conditions in space, complex navigation (without a GPS) etc.

The final challenge is the most difficult – the landing on the moon.

The spacecraft’s journey to the moon – the longest ever:
The spacecraft will orbit the Earth in elliptical orbits and will travel 6.5 million
kilometers – the longest distance ever traveled to the moon. During these orbits, the
spacecraft will raise its orbit around Earth until it reaches the proximity of the moon.
When the spacecraft is in lunar orbit, about 10 days before landing, it will orbit it
until the appropriate time and an autonomous landing process will begin.

The route will take about two months until the expected landing on April 11, 2019.

The adventure started to mature a few years ago as the young entrepreneurs Yariv Bash, Kfir Damari and Yehonatan Weintraub enrolled in Google Lunar XPRIZE Challenge. The competition ended without a winner in March 2018. However SpaceIL, announced that it would continue working on its mission. 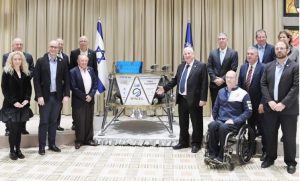 Israeli President Rivlin at a ceremony with the Israeli spacecraft
that will be sent to the moon. (Photo: AMOS BEN-GERSHOM/GPO)

The significance of the project for the State of Israel

Landing a spacecraft on the moon will bring an extraordinary achievement to the
small State of Israel. The project expresses Israel’s technological capabilities and
opens many opportunities for it.

It will promote scientific education of the next generation: since its foundation, the NGO met with over one million students throughout the country. It will advance and promote science and research. It would open a new horizon for the Israeli economy thanks to its engineering knowledge and advanced development capabilities.

The success of Beresheet is a symbol of Israel’s success in these and other fields.

The planning and development process of the spacecraft included intensive work by
dozens of engineers, scientists and staff. The development by SpaceIL and IAI started
in 2015 and lasted until 2018. The spacecraft, which weighs only 600 kilograms, is
considered the smallest to land on the moon. The height of “Beresheet” is 1.5
meters, it is about two meters wide and it carries fuel which is approximately 75
percent of its weight. Its maximum speed will reach 10 km per second (36,000 km /
h).

The Israeli flag on the moon, the selfie and a scientific mission in conjunction with NASA via Israel Space Agency

Once landed on the moon, the spacecraft carrying the Israeli flag will begin taking
photographs of the landing site and a selfie to prove we have indeed landed on the
moon.

The spacecraft has an important scientific mission to complete: measure the
moon’s magnetic field as part of an experiment carried out in collaboration with the
Weizmann Institute. NASA is also participating in the mission under an agreement entered with Israel Space Agency. NASA has installed a laser retroreflector on the
spacecraft, and will assist in communicating the spacecraft on the moon.

The spacecraft carries a “time capsule” – a huge database of hundreds of digital files
ranging from details about the NGO, the spacecraft and the crew of the project,
national symbols, cultural items and materials collected from the general public over
the years to be placed on the moon by the spacecraft.

The time capsule will remain on the Moon even after the mission is completed.

Since the spacecraft is not expected to return to Earth, the information it carries is
destined to remain on the moon for an indefinite period, and may be found and
distributed by future generations.

Over the years, additional partners have been added from the private sector, government and academia. The most prominent of them are the Weizmann Institute of Science, the Israeli Space Agency, the Ministry of Science and Technology, Bezeq and others.

Among the main contributors to the project are Miri and Sheldon Adelson, Sammy
Sagol, Lynn Schusterman, Sylvan Adams, Stephen Grand and others. Philanthropist
and businessman Morris Kahn took the lead in completing the mission in funding $40
million of the project and in his role as president of SpaceIL.