Jerusalem, Israel — November 30, 2016 … Chairman of the Executive of The Jewish Agency for Israel Natan Sharansky and President of the Combined Jewish Philanthropies (CJP) of Boston Barry Shrage today visited Haifa and distributed aid funds to families whose homes were severely damaged in the recent wildfires.

“In these trying times, the Jewish world is united in concern for those Israelis rendered homeless by the recent wildfires,” said Sharansky.

“The Jewish Agency is distributing immediate grants of $1,000 to each family unable to return home. Today alone, we distributed more than a hundred such grant checks in Haifa and across the country. Every family unable to return home will receive immediate financial assistance from world Jewry, thanks in large part to contributions from the Jewish communities of Chicago, Boston, and other places around the world.”

Shrage said: “Haifa was blessed to successfully evacuate 60,000 of the city’s residents without any deaths and only a small number of minor injuries in the midst of severe and expanding fire.”

“The secret of this miracle is hundreds of dedicated, intelligent, caring, and committed staff and volunteers, led by some of the very best professionals I’ve ever met. This network of professionals is tied together by Haifa’s Crisis Management System, developed and refined since the second Lebanon war and reflecting changes needed to address some of the management and coordination challenges that emerged during the war. The system ensures cooperation and communications among all the agencies involved, along with clear lines of authority and decision making. Haifa is a strong community characterized by mutual respect, cooperation, inclusion, and hope. Boston is blessed to be partnering with this community, and grateful for the cooperation of The Jewish Agency and the JDC.”

The Jewish Agency is distributing aid checks to hundreds of families across Israel whose homes were severely damaged by the recent wildfires and have thus been rendered uninhabitable.

The grants of $1,000 per family are meant to help the families address immediate needs presented by the loss of their places of residence. They were made possible by special contributions from the Jewish Federations of North America, led by the Jewish United Fund of Metropolitan Chicago and the Combined Jewish Philanthropies of Boston, as well from Keren Hayesod-UIA and other donors. Grantees are being identified via local municipalities and in coordination with the National Emergency Authority. 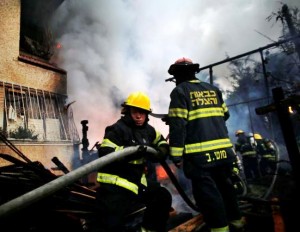 Jerusalem, Israel — November 25, 2016 … The Israel Fire and Rescue Service has asked the Emergency Volunteers Project (EVP) to immediately deploy at least 50 firefighters from the United States to assist in battling over 200 fires in Israel.

EVP is emphasizing that Islamic terrorists have set fire to several wooded areas of Israel and have created a critical need of both added manpower and equipment.

Twenty-two people have been arrested on suspicion of arson or incitement to arson.

The fires, which began on Tuesday, have raged throughout the country, blazing through parched forests, incinerating scores of homes and forcing tens of thousands of people to flee.

The activation request calls on firefighters to be on the ground in Israel within 30 hours.
That all preparations have been made, funding is in place and all that is need are experienced firefighters.

EVP states that if firefighters are able to deploy immediately to Israel, to contact Tony S., EVP Director of Fire Operations at 214-923-5567 or by email to FIRE@EVP.org.il with a cc to office@evp.org.il. Please do not send links or attachments.

Over 80,000 people have been evacuated from Israel’s third largest city Haifa.

Prime Minister Netanyahu told the firefighters: “The most important thing is to evacuate people, and also yourselves. Nobody needs to die here, nobody. This is before anything else. There are many other things but this takes precedence.”

Netanyahu spoke with Arik Abulof, an officer with the aerial firefighting squadron, who told the Prime Minister: “What you have done here,  this squadron certainly constitutes a significant force in assisting the units on the ground. Without it, I figure that the forces, and I belong to them, would have had to spend many more hours, long days, in order to achieve control. The damage to property and life, the damage to life, would have been much worse. There is no doubt that these planes, they are doing the work in order to assist in blocking the flames and giving respite to the ground forces.”

“I am pleased that you are saying this,” said Netanyahu.

“There was a clear decision to do this during the Carmel fire, and afterwards we decided to establish the squadron even though it was not included in any report, not in the State Comptroller’s report on the fire, nothing. Two words were lacking there: Firefighting planes. One cannot fight fire without firefighters like you. It is impossible. This is heroism; you stand in the line of fire. But there are no forest fires and fires on the ground, nowhere in the world, in which they are dealt with effectively without firefighting planes. And I am proud of the fact that today we have a large and good squadron.”

Security analysts in Israel state that these fires are not related to any kind of land occupation.
“This is Jihad, Islamic holy war against Jews and Christians. Those terrorists who are creating the fires are being paid by Iran and other Islamic state terror nations. If they could burn down New York, Paris or London, they would.” 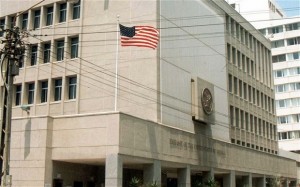 “Trump lied to get the Jewish vote
and some Jews fell for it.”

Jerusalem, Israel — November 12, 2016 … Despite campaign promises to move the US Embassy from Tel Aviv to Jerusalem, senior advisers to Trump are now confirming there will be no move.

Walid Phares, one of Trump’s top foreign policy advisers, stated that Trump will not move the US Embassy to Jerusalem and that the Iran Deal will not be “ripped up” but rather renegotiated with Tehran.

“Ripping up is maybe a too strong of word, he’s gonna take that agreement, it’s been done before in international context, and then review it,” Phares told the BBC.

Many Jews in the States and in Israel were seduced into supporting Trump over the Jerusalem and Iran nuclear issues. The majority of American US Jewish voters did not vote for Trump – these include both Democrats and Republicans who view Trump as totally unqualified, racist and mentally unfit.

News of Trump’s surprise election victory raised hopes among conservative politicians in Israel that Trump will do what his three predecessors refused to do, despite their earlier promises: relocate the US Embassy from Tel Aviv to Israel’s declared capital, in line with US law passed 21 years ago.

“Every presidential candidate, except for Hillary Clinton, has promised that they would move the US Embassy to Jerusalem but they never did. I am not convinced that it will happen,” Elkin responded.

A senior Trump campaign source stated that Trump would be focusing on US domestic issues and that he didn’t need to alienate Arab and Muslim states further since he advocated a total ban against Muslims entering the United States. He said “Make America Great Again” was about making “America First” – which explains Trump’s motivation to disengage from the Middle East, destroy NATO and delegate fighting ISIS and all Middle East threats to Syria and Russia.

Daniel Cohen, a former Ted Cruz staffer, said: “Anyone who did any kind of due diligence would have seen that Trump is not one for telling the truth. Over 80 percent of what Trump stated in his campaign has been proved false. Those Jews who voted for Trump did so based on his projected confidence, not substance, not fact. They will now pay a heavy price for supporting a candidate who originally wanted to treat Palestinian terrorists as equals with Israelis.”

Cohen concluded: “Trump will never move the Embassy to Jerusalem. It was all talk and some Jews fell for it.” 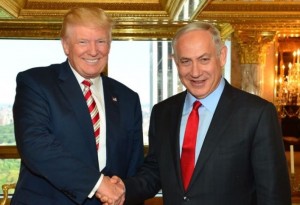 Jerusalem, Israel — November 9, 2016 … Part of the following was communicated by the Prime Minister’s Office to the Israel News Agency.

Upon winning the US Electoral College votes confirming that Donald Trump had won the race for the Presidency, Israeli Prime Minister Benjamin Netanyahu issued the following statement.

“I congratulate Donald Trump on being elected the 45th President of the United States of America. President-elect Trump is a true friend of the State of Israel, and I look forward to working with him to advance security, stability and peace in our region.”

​Netanyahu added: “The ironclad bond between the United States and Israel is rooted in shared values, buttressed by shared interests and driven by a shared destiny.

I am confident that President-elect Trump and I will continue to strengthen the unique alliance between our two countries and bring it to ever greater heights.”

In one of the most shocking US elections in modern political history, Donald Trump defeated former New York Senator and Secretary of State Hillary Clinton.

“I pledge to every citizen of our land that I will be president for all Americans,” Trump said in his victory speech. “For those who have chosen not to support me in the past, of which there were a few people, I’m reaching out to you for your guidance and your help so we can work together and unify our great country.”

Trump also said Hillary Clinton had called him to concede the race. “Hillary has worked very long and very hard over a long period of time, and we owe her a major debt of gratitude for her service to our country,” he said. “I mean that very sincerely.”

Jews who wish to congratulate President-Elect Trump may do so at www.Jews4Trump.com.