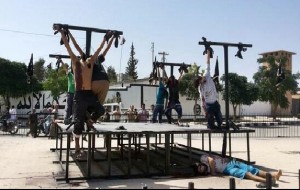 New York, New York — March 31, 2015 … The United Nations is turning a blind eye to the murder of Christians and other minorities in the Arab world, said Israeli Ambassador to the United Nations Ron Prosor.

“In 2013, three Iranian Christians were caught selling Bibles, found guilty of ‘crimes against state security,’ and sentenced to 10 years in prison.”

Prosor said that while minorities were persecuted and slaughtered throughout the region, “there is only one place in the Middle East where minorities have the freedom to practice their faith, to change faiths, or to practice no faith at all – and that is Israel.”

“It’s time for the U.N. Security Council to break its silence on the murder and expulsion of Christians and other minorities in Arab states,” the Israeli envoy said.

“Since Hamas took over in 2007, half of the Christian community has fled Gaza. After the PA took control of Bethlehem in 1995, Palestinian gunmen seized Christian homes and looted the Church of Nativity. Owing to this persecution, the city’s Christian population fell by nearly 70%.”

Prosor also praised the Kurdish fighters in Iraq for their courage and called on the international community to back them, stressing the Kurds’ right to political independence.

Earlier, Prosor warned against allowing a Hamas-controlled terrorist state to be established in Judea and Samaria.

“The Palestinians want a state without negotiations, without compromise, and without a peace deal,” he said.

“Imagine what a state like that would look like — an extremist Islamist terrorist state. A state that will be funded by Iran, will be armed like Hezbollah in Lebanon, that will be as unstable as Syria and Iraq and as dangerous as the Islamic State.”

ISIS beheaded over a dozen members of Egypt’s Coptic Christian minority on a Libyan beach in February. The UN said nothing.

The mass execution with ISIS jihadists in black stood behind each of the victims, who were all dressed in orange jumpsuits with their hands cuffed behind them.

ISIS’s al-Hayat Media, included a masked English-speaking jihadi who said, “The sea you have hidden Sheikh Osama bin Laden’s body in, we swear to Allah, we will mix it with your blood.”

ISIS has imposed its barbaric rule on large areas of Iraq and Syria.

Egypt’s President Abdel Fattah el-Sisi confirmed in a statement that Egyptian “martyrs” had fallen victim to terrorism and expressed his condolences to the Egyptian people.

Twenty-one Egyptian Christians were kidnapped in the Libyan coastal city of Sirte in two separate incidents in December and January. Officials said all of them had been killed.

“Credible research has reached the shocking conclusion that every year an estimate of more than 100,000 Christians are murdered in the Middle East and Africa because of some relation to their faith,” Vatican spokesman Archbishop Silvano Maria Tomasi told the United Nations Human Rights Council.