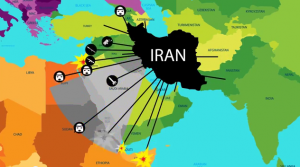 Jerusalem, Israel — March 30, 2015 … The following was communicated by the Prime Minister’s Office to the Israel News Agency.

“I have just come from a conversation with US Senate Republican leader Mitch McConnell. Over the weekend I spoke with US Senate Democratic leader Harry Reid. I heard from both of them about strong and continuing bipartisan support for Israel and of course this is very important.

I expressed to them our deep concern over the agreement being formulated with Iran in the nuclear talks. This agreement, as it appears, confirms all of our concerns and even more so.

Even as meetings proceed on this dangerous agreement, Iran’s proxies in Yemen are overrunning large sections of that country and are attempting to seize control of the strategic Bab-el-Mandeb straits which would affect the naval balance and the global oil supply.

After the Beirut-Damascus-Baghdad axis, Iran is carrying out a pincers movement in the south as well in order to take over and conquer the entire Middle East. The Iran-Lausanne-Yemen axis is very dangerous for humanity and needs to be stopped.”

Netanyahu concluded: “The agreement being formulated in Lausanne sends a message that there is no price for aggression and on the contrary – that Iran’s aggression is to be rewarded. The moderate and responsible countries in the region, especially Israel and also many other countries, will be the first to be hurt by this agreement.

One cannot understand that when forces supported by Iran continue to conquer more ground in Yemen, in Lausanne they are closing their eyes to this aggression. But we are not closing our eyes and we will continue to act against every threat in every generation, certainly in this generation.”