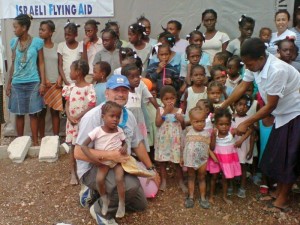 Israel was the first nation to arrive in Haiti after the earthquake.
The Jews who participated in this humanitarian mission saved thousands of lives.

Jerusalem, Israel — July 8, 2016 … Students For Justice In Palestine (SJP), an anti-semitic, anti-Israel, pro-Jihad organization is trying to blame Israel for the recent shootings of African Americans by US police.

In a statement released by the NYU Students for Justice in Palestine, the group states:

“In the past 48 hours another two black men have been lynched by the police. The total number of black people lynched by cops in 2016 now totals 136. We must remember that many US police departments train with the‪ #‎IsraeliDefenseForces‬. The same forces behind the genocide of black people in America are behind the genocide of Palestinians. What this means is that Palestinians must stand with our black comrades. We must struggle for their liberation. It is as important as our own. ‪#‎AltonSterling‬ is as important as ‪#‎AliDawabsheh‬. Palestinian liberation and black liberation go together. We must recognize this and commit to building for it.”

The Iranian and Hamas funded SJP, is attempting to reach and divide Black Americans from Jews using the following groups on Twitter:

The purpose of this transparent propaganda is to incite hate and violence between Jews and Blacks.
There are several basic flaws in this divide and conquer strategy being used by Iran’s American proxy.

Relations between the Jewish American and African American communities has never been stronger. The intimate ties between Jews and Blacks go back decades when Jews proudly marched alongside Blacks in the 1960’s civil rights movement.

As far back as the 19th century, Jewish storekeepers were virtually the only Southern merchants who addressed black customers as “Mr.” and “Mrs.” and permitted them to try on clothing. By the early 20th century, a few Southern Jews even ventured to speak out against the evils of white supremacy. In 1929, Louis Isaac Jaffe, editorial writer for the Norfolk Virginia-Pilot won the Pulitzer Prize for his denunciation of lynching and the reactionary Harry Byrd political machine.

Fast forward – Israel was the first nation to arrive in Haiti after the devastating 2009 earthquake. They created the first field hospital after the quake and saved thousands of black lives.

Israel has absorbed thousands of Africans into Israel – many of whom serve in the IDF.
Today, Israeli Prime Minister Netanyahu is visiting seven African nations to enhance security and trade.

When the SJP speaks of genocide – many wonder where as the Arab population in Israel has grown over 800 percent since Israel’s rebirth in 1948. When the SJP speaks of US police departments training with the IDF, it’s no wonder as Jihadists among Israeli Arabs blow up restaurants, buses and go on stabbing sprees in Israel. Israel has learned how to defend herself against Islamic terrorism. The challenge that the West and Israel face is not a so-called, and invented “occupation”  but rather a very real Jihad – Holy War by ISIS, Hamas and Islamic Jihad against Christians and Jews.

The ADL addressed the incitement of the Students for Justice in Palestine: “Your continued efforts to connect serious domestic social issues to the Israeli-Palestinian conflict are tremendously disingenuous and manipulative. Exploiting the tragic deaths of Alton Sterling and Philando Castile by attacking the State of Israel not only distorts reality, but also serves to distract people from an important public discussion.”

The Israel News Agency will go one step further. We ask the FBI to investigate Students for Justice in Palestine for race speech and incitement to violence. Demonizing Israel is one thing. To create conflict, hate and violence on the back of shootings in Texas, Louisiana and Minnesota between American Jews and American Blacks is a totally different equation.