Netanyahu issued the following statement at the African summit in Uganda:

“This meeting I think will be a milestone, the meeting of seven leaders from African countries with Israel. I think it underscores the fact that we are in a monumental change in the relations between Israel and Africa, beginning here. It is warranted by the great changes that are taking place in the world. We at once have an enormous boost and jump towards development, towards the possibilities of this new century, with all the promises of technology; but at the same time, we have a savage medievalism that seeks to take all our societies back, to destroy them, destroy our freedoms and destroy our hopes.

So we at once have to do two things: Develop our countries into the future, and fight back the forces that want to take us to a dark past. And we can do this. I believe Israel is the perfect partner for the countries of Africa. I want to thank deeply all the Excellencies, the leaders who came here, again on short notice, to attend this summit. From our conversations, I think we put flesh on this structure. We believe it. It’s not something we say, lip service – we give lip service to. We believe it. We’ve begun to do it among our respective countries. But I believe that we see opportunities in expanding this to Africa as a whole.

Israel has fought terrorism and has developed, as you said Mr. President today, we’ve developed certain capacities, which I think are important for the defense of the world against this global onslaught of terrorism. But equally, we have tremendous opportunities. We’ve solved our water problem, even though we’re a very dry land. We’ve solved our agricultural problem. We produce, with great productivity, vegetables, dairy. I’m always boasting which cow produces more milk per cow? In the world, you think it’s a French cow or a Dutch cow. It’s an Israeli cow. It’s a computerized cow, every moo is monitored, you know?

But we are eager to share this technology in so many fields with our African friends. We think that Israel now is the best partner that the countries of Africa could have, and it’s something that is dear to our hearts. The founder of modern Zionism, the national movement of the Jewish people, was Theodore Herzl, and he said, “After I liberate the Jewish people, I will go to Africa to help liberate the black people.” We have our African brethren, the Ethiopian Jews, who are in our society, and I personally work every few weeks to help integrate more and more and incorporate in our society.

Seven African heads of state met with Prime Minister Netanyahu at a counterterrorism conference held in Uganda. Netanyahu expressed his desire to enhance not only security relations, but agricultural, economic relations as well. 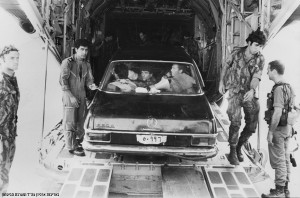 Israeli commandos freed more than 100 hostages held for a week at an airport terminal, in a legendary, daring operation. They returned to Israel on July 4, 1976.

Monday’s ceremony at the scene of the historic IDF raid was attended by some of the rescued hostages and Israeli special forces who carried out the operation.

“Exactly 40 years ago Israeli soldiers carried out the historic mission in Entebbe,” said Netanyahu. Forty years ago they landed in the dead of night in a country led by a brutal dictator who gave refuge to terrorists. Today we landed in broad daylight to be welcomed by a president who fights terrorism.”

His elder brother, Jonathan, was shot dead as he led the operation to free hostages, who had been taken captive on an Air France flight by Palestinian and German terrorists.

The following was expressed in a joint statement:  “Forty years after the historic IDF hostage rescue operation at Entebbe airport, the world continues to face the threat of international terrorism. The need to unite with regional and global partners in fighting this scourge is more important than ever.

At today’s summit, the leaders committed their countries to enhancing their cooperation in the fight against terror by sharing intelligence and utilizing new technologies, including in the sphere of cyber security.”