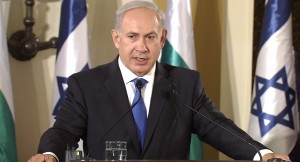 Jerusalem — November 8 … Part of the following was communicated by the Israel Prime Minister’s Office to the Israel News Agency.

“Israel is a nation of law. We will not tolerate disturbances and rioting. We will act against those who throw stones, block roads and call for the establishment of a Palestinian state in place of the State of Israel. Whoever does not honor Israeli law will be punished with utmost severity. I will instruct the Interior Minister to evaluate revoking the citizenship of those who call for the destruction of the State of Israel.”

Netanyahu issued the above statement following thousands of rioters in Kafr Kana, a town in the Lower Galilee, clashing with Israel security forces on Saturday hours after a video emerged of police shooting a youth who was wielding a knife late Friday.

After the video emerged on Saturday police said they had no further statement at the time, only that the matter is now being investigated by the Justice Ministry’s department for investigating police.

Netanyahu also instructed officials to raze the homes of ‘terrorists’ who carry out attacks in Jerusalem.

The order was handed down during an emergency session on Thursday to discuss several violent incidents that have hit the city said Israel Radio.

The measures come in response to a series of deadly hit and run attacks which have recently targeted the holy city.

On Friday, Shalom Badani, a 17-year-old Israeli, died from injuries he sustained during a terror attack on Wednesday, in which Ibrahim al-Akari, a Palestinian Arab residing in East Jerusalem, rammed his van into a crowd. Akari was later shot dead by Israeli security forces after exiting his vehicle and attacking the crowd with a metal bar. A police officer was also killed in the attack. Twelve other people sustained injuries.

“Jerusalem is Israel’s capital and it is not a settlement,” said Netanyahu during a meeting with the new European Union Foreign Policy Chief Federica Mogherini.

The Israeli Prime Minister said that the neighborhoods where Jews were living and building “have been in the hands of Israeli governments for the last 50 years.”

He continued that any such neighborhoods would remain a part of Israel under any peace arrangement, rejecting as “false” any claim that settlement construction lies at the root of the ongoing conflict. The issue facing Israel and the West is not related to the building of homes, but is Islamic Jihad – Holy War against all Jews and Christians.

Netanyahu called European politicians who had called for the unilateral recognition of Palestinian statehood “irresponsible.”