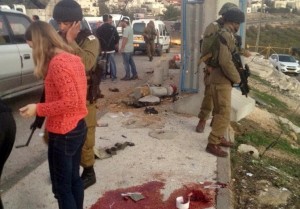 Lamkus was murdered by a Palestinian terrorist while waiting with others at a bus stop at the Gush Etzion junction in Israel, just next to the hitching station where Israeli teenagers Eyal Yifrah, Gilad Sha’ar and Naftali Frenkel were abducted this summer before being murdered by Palestinian Arabs.

A 26-year-old man was also stabbed and has been reported in moderate condition. A 50-year-old man who jumped from his car when he saw the attack, fought with the terrorist and was injured as well.

A guard at the nearby town of Alon Shvut, just southwest of Jerusalem, ran to the scene and shot the terrorist, who died while being transported by ambulance to a nearby hospital.

The killer was identified by police as Maher Hamdi al-Hashalmoun from Hebron. A member of Islamic Jihad, he spent more than four years in Israeli prisons and was released five years ago, police said.

The funeral for Lamkus is scheduled to take place on Tuesday at 10 a.m. in Tekoa, where the victim and her family have lived for 15 years. 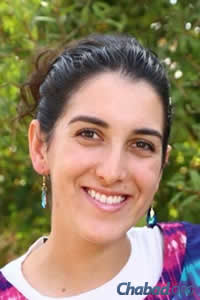 Dalia Lamkus, a 25-year-old resident of Tekoa, was stabbed to death
by an Islamic terrorist. Her only crime was that she was Jewish.

In response to the terror attacks Israel Prime Minister Netanyahu ordered the advancement of plans to demolish the homes of Palestinian terrorists in hopes of deterring further attacks.Netanyahu has also placed more security forces, uniformed and plainclothes in the field, according the Prime Minister’s Office. Members of elite units of the Israel Police and the IDF are expected to increase patrols at bus stops, train stations and areas of high public traffic.Netanyahu held an emergency meeting with Defense Minister Moshe Yaalon, Public Defense Minister Yitzhak Aharonovitch, IDF Chief-of-Staff Lt.-Gen. Benny Gantz, Shin Bet Director Yoram Cohen, Israel Police Commissioner Insp.-Gen. Yohanan Danino and Attorney General Yehuda Weinstein.He held similar consultations last week after a vehicular terrorist attack in which two Israelis were murdered.Earlier in the day he told his party’s faction in the Knesset that Israel would withstand this latest wave of violence.“The terrorism against us knows no borders. It is aimed at all parts of the country for a simple reason. The terrorists and those who incite to it want to get rid of us wherever we are. As far as they’re concerned, we don’t need to be in Tel Aviv, Jerusalem or anywhere else,” he said at a Likud faction meeting.“I’ll promise you one thing: They won’t succeed,” Netanyahu stated.US State Department spokeswoman Jen Psaki condemned the terror attacks in Israel. “We strongly condemn the stabbings today. We deeply regret the loss of life. Our condolences go out to the families,” she said.

In response to threats from Iran, Netanyahu has released the following statement this evening:

“There are reports that the P5+1 countries are close to a deal with Iran on Iran’s nuclear program. I’ve instructed my office to send a letter to the foreign ministers of the P5+1 countries. In that letter I bring, verbatim, the words of Iran’s ruler Ayatollah Khamenei. The leader of this country that is depicted by some as moderate, the Islamic State of Iran, has said in the last 48 hours: one, that he calls for the annihilation of Israel – his words, not mine; two, he gives nine ways and reasons of how and why Israel should be annihilated – his words, not mine. He’s publically calling for the annihilation of Israel as he is negotiating a nuclear deal with the P5+1 countries.”

“There is no moderation in Iran. It is unrepentant, unreformed, it calls for Israel’s eradication, it promotes international terrorism, and as the IAEA report just said, it continues to deceive the international community about its nuclear weapons program. This terrorist regime in Iran must not be allowed to become a nuclear threshold power. And I call on the P5+1 countries – don’t rush into a deal that would let Iran rush to the bomb.”