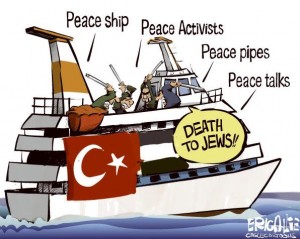 Turkey, Iran, Syria attempting to divert media
away from their human rights abuses.

Jerusalem, Israel — June 28, 2015 … In response to a failed PR stunt using a flotilla of boats to illegally enter Gaza, paid activists supporting Hamas in Gaza will be welcomed to Israel with a letter from the Prime Minister’s Office.

The letter will be given to 50 people on the boats as they are legally detained in Israeli waters and escorted to Ashdod.

The letter, which will be distributed with food and drinks, reads: “Welcome to Israel! Perhaps you meant to set sail for a place not far from here – Syria.”“There the Assad regime is slaughtering its own people every day with the support of the murderous regime in Iran.”

“In contrast, here in Israel, we are dealing with a situation where terrorist organizations such as Hamas are trying to harm innocent civilians. In the face of these attempts, we are protecting the citizens of Israel in accordance with international law.”

The letter notes Israel’s transfer of 1.6 million tons of humanitarian aid to Gaza, while it struggles to be rebuilt after the war last summer. The letter said that Israel facilitated the transfer of the supplies, which, it noted, amounts to approximately one ton for each Gaza resident.

The letter states that Israel regularly assisted in humanitarian projects benefiting Palestinians, but would not tolerate the import of weapons for terrorist groups. “Only a year ago, we thwarted an attempt to smuggle by sea hundreds of weapons intended for use against innocent civilians.

“There is no blockade on the Gaza Strip, and you are invited to transfer humanitarian supplies through Israel. Preventing access through the sea is done in accordance with international law, and we even received backing from a committee of the UN Secretary-General.

“If human rights really interested you, you wouldn’t sail in solidarity with a terror group that executes Gazans without trial, and uses Gazan children as human shields,” the prime minister’s letter says.

The Prime Minister’s letter to those on the flotilla concludes by pointing out that the activists chose not to visit Israel, as they would have been “impressed” by the democracy upheld by the Jewish state that affords equality and religious freedoms for all its citizens.

Israel and Egypt imposed a blockade on Gaza in 2007 after the Islamist Hamas group wrested control of the Strip in a bloody coup, ousting the Palestinian Authority leadership.