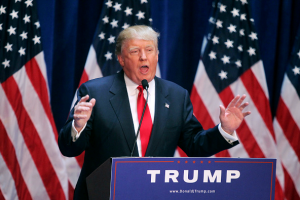 “This is not the American Way,” observed Alan Dershowitz, Harvard’s most distinguished civil liberties law professor, about the chilling effect de Blasio’s action could have on freedom of speech.

“De Blasio seems to put himself directly, squarely in conflict with the First Amendment,” he told TheDCNF in an interview.

At his presidential campaign kickoff, Trump said immigrants from Mexico are “bringing drugs, they’re bringing crime, they’re rapists, and some, I assume, are good people.”

Thursday, de Blasio shot back, saying “Donald Trump’s remarks were disgusting and offensive, and this hateful language has no place in our city.”

But his press secretary went a step further, saying the city was reviewing all of Trump’s contracts. Now civil liberties advocates are striking back at the mayor’s proposed action, which Dershowitz said was “plainly unconstitutional.”

They point to a landmark 1996 Supreme Court ruling that overwhelmingly declared it was unconstitutional to tie governmental contracts to a person’s beliefs.

“The city says, ‘We don’t want to renew it because we don’t like your speech.’ That would presumptively violate the First Amendment,” noted UCLA law professor Eugene Volokh in a DCNF interview. “The statement by the Mayor is a real danger to public debate,” he said, charging it would set dubious precedent for all city contractors, big and small.

The law professor, who also posts the “Volokh Conspiracy” blog on the Washington Post, explained that the First Amendment rights for government contractors were long ago resolved in the Umbehr case. In a 7 to 2 majority written by former Supreme Court Justice Sandra Day O’Connor’s, the court declared that the First Amendment’s guarantee of freedom of speech shielded government contractors from facing the revocation of existing contracts due to things they said in public.

The case involved a county contractor in Kansas who was fired because of his frequent public criticism of a county board. The Supreme Court said the county had infringed on his First Amendment right to freedom of speech when they retaliated by terminating his contract.

The high court stated, “The First Amendment protects independent contractors from the termination or prevention of automatic renewal of at-will government contracts in retaliation for their exercise of the freedom of speech.”

Dershowitz agreed, telling TheDCNF, “He would have a fairly open and shut case if they deprived him of any contract.”

Aside from the legal issues, de Blasio may also opened the door to public relations deluge by threatening to revoke specific city contracts Trump holds. The mayor’s own procurement policy board states that if a contract is to be terminated, the contractor can demand a public hearing to protest. The policy provides Trump the opportunity to publicly eviscerate de Blasio in a highly visible, legal setting.

“All persons attending who desire to testify shall have the opportunity to do so,” the board notes in its policy rules, which were updated in May 2014 during de Blasio’s current tenure.

The Trump Organization operates several city concessions, including a golf course, ice skating rink and carousel, according to Fox News.

Fox News reports that Trump Golf Links at Ferry Point Park opened in April in the Bronx. The presidential candidate’s company has a 20-year concession agreement to operate the facility.

Volokh says that the mayor’s action won’t be much of a financial threat to Trump, who has $4.1 billion in net worth, according to Forbes. Instead, Volokh worries, it sends a message to smaller vendors.

“If the city gets away with cancelling the Trump contract, it sends a message to these kinds of small contractors, saying ‘hey, it’s dangerous. It’s dangerous to say things on these topics when you’re contracting with the city of New York,” the civil liberties advocate said.

Dershowitz agrees. “He should have attacked him on the merits,” he said.  “But to take away his contracts is to misuse the power of government to stifle free speech. And that’s just not the American Way.”

As Trump stands up for the US advocating more jobs and secure borders, the American Jewish community has created their own group supporting Donald Trump. The group can be found at www.Jews4Trump.com.