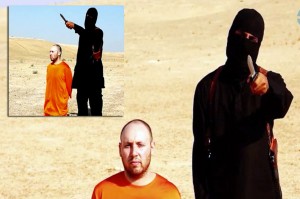 Miami — September 5, 2014 … The family of Jewish journalist Steven Sotloff, the second American beheaded by Islamic State terrorists, issued a challenge to the leader of ISIS. A family spokesperson said on Wednesday that Steven was “a gentle soul”, and invited the group’s leader to a debate on the peaceful teachings of the Muslim holy book, the Koran.Family spokesperson Barak Barfi ended the statement with off-the-cuff remarks in Arabic, saying: “Steve died a martyr for the sake of God.”He then challenged Islamic State (ISIS) leader Abu Bakr al-Baghdadi to debate Islam, saying: “Woe to you. You said the month of Ramadan is the month of mercy. Where is your mercy?”“Abu Bakr, I am ready to debate with you. I come in peace. I have no sword in my hand and I am ready for your answer,” added Barfi, who is an Arabic scholar and research fellow at the New America Foundation think tank in Washington.Islamic State released a video on Tuesday (September 2) purporting to show the beheading Sotloff.Following the beheading of journalist Jim Foley last week, Sotloff’s mother made an emotional plea to Islamic State, requesting they release her son.The Sotloff family has yet to speak personally to media following their son Steven’s death and requested to mourn privately.US and British officials both examined the video, showing the same British-accented executioner who appeared in an Aug. 19 video of the killing of US journalist James Foley, concluding it was authentic.

Family and friends gathered to remember the life of slain Miami journalist Steven Sotloff at a memorial service Friday.

Temple Beth Am in Pinecrest, Florida was expecting upwards of 1,000 people for the 1 p.m. memorial, which is open to the public. Sotloff had attended the temple’s elementary school and his mother, Shirley, had worked as a teacher there.Most Middle East experts expect that Abu Bakr al-Baghdadi will read or see the above challenge on the Internet. But they expect little or no response.