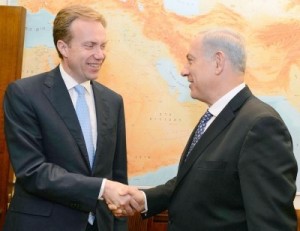 Prime Minister Benjamin Netanyahu, this morning met with Norwegian Foreign Minister Borge Brende and told him at the start of their meeting: “You’re coming here at tumultuous times. I think there is a growing awareness in the international community of the threat posed by Islamist terror and radicalism. Groups like ISIS, Hamas, al Nusra, al Qaeda, al Shabaab, Hezbollah supported by Iran, they form a clear and present danger to our civilization, to our way of life, our values.”

The Prime Minister added: “I think the most important thing is to nip it in the bud, and those who don’t do so will find Islamic terrorism that is here today, tomorrow at their doorstep. I know that you understand that, and I look forward to talking to you about that and the pursuit of peace.”

Norwegian Foreign Minister Brende replied, “[I send] condolences from Norway on what has taken place in difficult times for Israel this summer with unprovoked terror attacks from Hamas in Gaza. I just came from the NATO summit in Wales to Israel and also there was a lot of discussion of to join forces now against Islamic extremism, especially now with the growing ISIS and challenge in Syria and Iraq.”

“I was in Iraq a week ago, and saw the horrible development in Irbil, thinking looking there and seeing that 20 kilometers away that was this extremist organization taking more and more control. I am also looking forward to discuss the upcoming donor meeting in New York, and all our collaboration.”