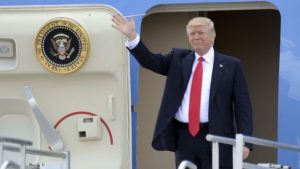 Jerusalem, Israel — May 19, 2017 … The carpets are red and vacuumed, 10,000 police have been issued riot gear and the champagne bottles are chillin in the King David Hotel’s kitchen.

Following are the details for US President Donald Trump’s visit to Israel. Please note that if you are a journalist and request to cover this historic visit, entry to all events is conditional upon presentation of a valid Government Press Office card and additional photo ID.

Pay parking is available at the Terminal 1 parking lot.

The President will then transfer to a helicopter which will fly him to Jerusalem.

At 13:00 President Trump will arrive at Israel President Reuven Rivlin residence. The event will be filmed and broadcast via satellite beginning at (approximately) 12:15.

The following details have been provided by the President’s Spokesperson, who is responsible for coverage of the event.

Arrival on the red carpet can be viewed via official coverage only and will be broadcast live.

Press conference by the Presidents in the Main Hall to be broadcast live.

At 18:00 – Meeting between Prime Minister Benjamin Netanyahu and US President Donald Trump, at the King David Hotel in Jerusalem.

At 19:30 – Israel Prime Minister Netanyahu and his wife Sarah will host US President Trump and the First Lady for dinner at the Prime Minister’s Residence in Jerusalem.

At 20:00 – Dinner for President Trump’s entourage and the Israeli delegation, under the aegis of Israel Defense Minister Avigdor Liberman, at the King David Hotel in Jerusalem.

Israel officials are requesting that the President spend at least an hour to understand and see the exhibits.

Israeli officials, have said that such a short visit was impossible and that an hour is the bare minimum to respectably tour the vast institution, which also serves as a museum and an education center to present the world with the tragedy suffered by the Jewish people and others under Nazi Germany.

President Trump will be the 6th American President to visit Israel. #POTUSinIsrael pic.twitter.com/vbsFc1zjNB

At 14:00 – US President Trump will make remarks at the Israel Museum in Jerusalem.

At 16:00 – Farewell ceremony for President Trump at Ben-Gurion International Airport.