Jerusalem, Israel — May 18, 2017 … Israel is putting on her best dress. The Jewish state is spending intensive days preparing for the visit of President Trump – from coordinating over 10,000 police to having the President’s favorite pillow await him at the King David Hotel.

Israel’s Defense Ministry was coordinating with the Israel Government Press Office to accommodate working space for hundreds of journalists and officials who have been invited to the welcoming ceremony at Ben Gurion International Airport.

In addition to a White House charter plane for the traveling press coming in from Saudi Arabia,  thirty C-17 American planes were reportedly expected to be needed in order to transport some 56 vehicles, including 14 limousines, as well as Trump’s presidential limousine known as “The Beast.”

Trump’s black, armored limousine, which is specially equipped to be heavily shielded from gunfire, grenades and explosive devices and to resistant to biological and chemical attack, is expected to arrive a few days before Trump’s arrival. 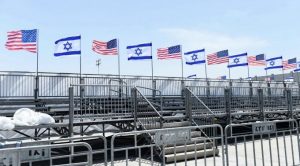 Three trucks were also reportedly being transported, containing armored glass to be installed in the windows of Jerusalem’s King David hotel where Trump will be staying.

On Sunday, at Ben-Gurion International Airport, a dress rehearsal will be held for the welcoming ceremony for US President Donald Trump, which will be held the following day, Monday, 22 May 2017.

Involved in preparing for the gala event are the Prime Minister’s Office, Foreign Ministry, Defense Ministry, IDF and the Airports Authority.

The media has been invited to cover the dress rehearsal. Interested journalists should arrive at Terminal 1, Gate 4 (international flights), group meeting point, from 11:00, upon prior coordination with the Airports Authority Spokesperson’s office.

The Israel Government Press Office will be establishing a press center at the Mamilla Hotel in Jerusalem on Monday, May 22 – 10:00-24:00 and Tuesday, May 23 – 08:00-18:00. Each journalist will be provided with live broadcast positions against the backdrop of Jerusalem’s Old City.