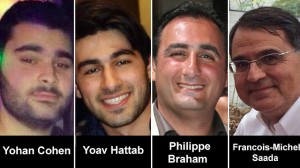 Their murders were not a “random” event.

Washington DC, — February 10, 2015 … Over the past two days the Obama administration has shockingly denied the anti-Semitic nature of the attack on a kosher grocery in Paris last month.

Yesterday during an interview with Vox, President Obama said, “it is entirely legitimate for the American people to be deeply concerned when you’ve got a bunch of violent, vicious zealots who behead people or randomly shoot a bunch of folks in a deli in Paris.”

“It is impossible to understand the lengths this administration goes to deny a blatant anti-Semitic terrorist attack in Paris,” said RJC Executive Director Matt Brooks.

“Who is this President worried about offending by calling this an anti-Semitic attack? Remembering the innocent people killed by these terrorists because of their religious beliefs should be paramount for our President. These statements by the President and his administration send the wrong message to both the Jewish community and the terrorists who are responsible for these heinous acts.”