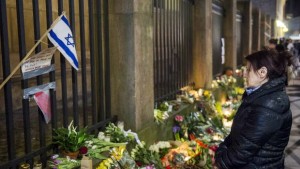 No more flowers for dead Jews – come home to Israel.

Jerusalem, Israel — February 15, 2015 … Part of the following was communicated by the Prime Minister’s Office to the Israel News Agency.

Israel Prime Minister Benjamin Netanyahu made the following remarks at the start of the Cabinet meeting in Jerusalem:

“Extremist Islamic terrorism has struck Europe again, this time in Denmark. We send our condolences to the Danish people and to the Jewish community in Denmark. Jews have been murdered again on European soil only because they were Jews and this wave of terrorist attacks – including murderous anti-Semitic attacks – is expected to continue.

Of course, Jews deserve protection in every country but we say to Jews, to our brothers and sisters: Israel is your home. We are preparing and calling for the absorption of mass immigration from Europe. I would like to tell all European Jews and all Jews wherever they are: ‘Israel is the home of every Jew.’

Netanyahu concluded: “Today we will submit to the Cabinet a NIS 180 million plan to encourage the absorption of immigrants from France, Belgium and Ukraine. We will submit additional plans later.

Israel’s Cabinet approved a more than $46 million plan to encourage immigration and to adapt the absorption process to Jews from France, Belgium and Ukraine.

The plan was designed by the Israel ministries of Aliyah and Immigrant Absorption, Education, Economy, Social Affairs and Social Services, Interior and Health.

“The government ascribes great importance to realizing the unique window of opportunities that has been created and to realizing the latent potential of the considerable increase in the number of telephone inquiries regarding the possibility of immigration from France, Belgium and Ukraine. Based on the understanding that successful absorption is a condition for additional immigration, the plan includes three layers: Encouraging immigration, strengthening and adapting absorption processes and special assistance for immigrants from emergency areas,” according to a statement from the Prime Minister’s Office.

Among the programs included in the plan are encouraging links to Israel and boosting Hebrew studies in the home countries; speeding up dealing with immigrant files by increasing the number of immigration emissaries; and counseling on personally adapted absorption tracks while still in the countries of origin including on looking for work and establishing businesses in Israel, or moving existing businesses to Israel.

Danish authorities have named the terrorist who murdered two people on Saturday: Omar Abdel Hamid Hussein, 22, who was born in Denmark.