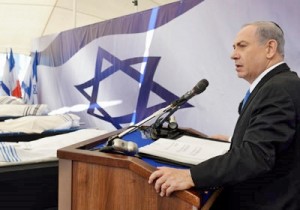 Jerusalem — January 13, 2015 … The bodies of French terror victims Yoav Hattab, 21, Yohan Cohen, 20, Philippe Braham, 40, and Francois-Michel Saada, 64, arrived in Israel aboard a pre-dawn flight from France. A few of these men wanted to make Aliya to Israel, to move to Israel – but not in this manner.

Thousands of Israelis, including Israel Prime Minister Netanyahu, Israel President Reuven Rivlin, Cabinet and Knesset members gathered at the Har Hamenuchot cemetery in the Givat Shaul section of the Jerusalem.

President Reuven Rivlin was the first to speak.

“This was pure, venomous evil, which stirs the very worst of memories,” said Rivlin.

“This is sheer hatred of Jews, abhorrent, dark and premeditated, which seeks to strike, wherever there is Jewish life,” Rivlin said.Rivlin called on European leaders to act to put a stop to such acts of anti-Semitic violence.“It would be dangerous to deny that we are talking about anti-Semitism, whether old or new.  Regardless of what may be the sick motives of terrorists, it is beholden upon the leaders of Europe to act, and commit to firm measures to return a sense of security and safety to the Jews of Europe; in Toulouse, in Paris, in Brussels, or in Burgas.” Rivlin concluded: “We cannot allow it to be the case, that in the year 2015, seventy years since the end of the Second World War, Jews are afraid to walk in the streets of Europe with skullcaps and tzitzit.”

Netanyahu then addressed the grieving Jewish mass, most of whom had tears flowing down their cheeks.

“We see the extent of your grief, the depth of your sorrow. When I embraced you in Paris, I told you that I am familiar with your agony, the anguish of partners, parents, sons and daughters, brothers and sisters who lost their beloved. On this day, when four new graves have been dug in the soil of Jerusalem, the entire State of Israel embraces you with love. These graves are the final resting place of Philippe, Yoav, Yohan and François-Michel.”

“Four dear, upstanding people who loved their fellows. Four people who, like the victims from Toulouse who are buried here, were murdered only because they were Jewish. Their lives were cut short in a frenzy of hatred by a despised murderer. But we shall not waste words on the contemptible killer, nor on those who slaughtered other innocents on French soil, as it is their actions that provide testimony of their murderous zeal, the poisonous fanaticism of the radical Islamic terrorist organizations that serves as the motivation for carrying out horrific acts around the world.”

I have been saying this for many years, and I will say it again here today: they are not the enemies only of the Jewish people. They are the enemies of all humanity, and the time has come for all civilized people to unite and eliminate them from our midst.

I returned from Paris yesterday. I marched with leaders who came from all over the world. I think that most of them understand, or are beginning to, that radical Islamist terrorism is a real and present danger to the peace of the world we live in.

And there, in Paris, I witnessed once again the strength of spirit and the warmth of the Jewish community in France, a community that has made a great contribution to France, and is connected with every fiber of its being to the people of Israel, the Torah of Israel and the Land of Israel – the three-ply cord that has never been severed, which has ensured our existence and is the secret of our resurrection.

Therefore, at this time, we should focus on the great spirit that is present here, the spirit of Israel which is saying: you will never, ever defeat us. The secret of our nation’s strength is our internal unity, our faith and the mutual responsibility that binds us together. This is the source of our power, our resilience – the resilience of an ancient people that has overcome every obstacle and adversity, and has risen from the dirt.

Look around here in the mountains of Jerusalem. Today, thankfully, we have a state of our own – a thriving, modern state; a state that shines a bright light, like a moral beacon for the world; a state that takes responsibility for its own fate. And our President was right when he said that Jews have the right to live in many countries, and it is their right to live in perfect safety. But I believe that they know deep in their hearts that they have only one country, the State of Israel, the historic homeland that will accept them with open arms, like beloved children.”

May the souls of Philippe, Yoav, Yohan and François-Michel be bound in the bond of life.
May we be comforted by the prosperity of our people and the building of our country.”