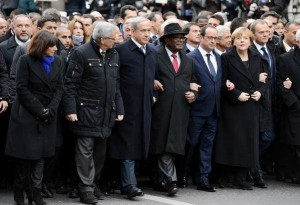 Jerusalem, Israel — January 12, 2015 … As one who has lived in Israel for over 25 years, served in a combat unit in the Israel Defense Forces and has consulted the Israeli government at varying levels, I have never been so proud of an Israeli leader.

Israeli Prime Minister Benjamin Netanyahu read with sadness about the murders of the editorial staff of Charlie Hebdo in Paris by members of Islamic terror groups. Netanyahu’s eyes swelled with tears as he heard that a Jewish market had been taken and Jewish hostages were being shot dead – because they were Jewish.

France had just voted for “Palestine” to become a state at the UN. That vote was defeated. But the betrayal by a Western democracy against the only democracy in the Middle East did not sit well with anyone in Israel, and in particular, the Prime Minister.

When Netanyahu heard that there was going to be a Unity March in Paris by world leaders against Islamic terrorism, he knew he had to be there. But there was no invite for Netanyahu. Paris was afraid that having Netanyahu would only darken the already heavy conflict that Paris now faced with Islamic Jihad. Netanyahu accepted that Paris did not want him, until others in his government said they were going.

“Who is going to prevent me from marching in a public rally?” asked Israeli Foreign Minister Avigdor Lieberman.

It took Netanyahu just a few minutes to pick up the phone and have his Chief of Staff coordinate a trip to France. The Israeli Embassy in Paris notified the French Foreign Ministry which then alerted French President Francois Hollande.

Hollande then called Netanyahu and personally invited him to attend. According to protocol, Netanyahu would be standing on the front row with other world leaders. Hollande also told Netanyahu that if he attended he would also have to invite PA President Mahmoud Abbas. Abbas is the last person that Netanyahu wanted to walk with, especially following Abba’s action to take Israel to the ICC.

Netanyahu had to make a very hard, personal decision. Fear a sniper’s bullet or illustrate leadership among democracies, among the free world, among all Jews and Christians against Islamic terror.

Netanyahu, the IDF commando, boarded his El-Al aircraft for Paris.

He was positioned in the second row as the Unity March began to lead over  three and half million people down the streets of Paris. Netanyahu thought that if he came this far, take the lead. Show no fear. Take a position in front. Yes, the sniper would now have an easy target, Netanyahu’s forehead was no longer obstructed by another human being. Certainly not by Barack Obama who stayed 5,000 miles away.

In IDF Hebrew, he would say: “kadeema” or follow me.

Netanyahu’s security detail was ordered to stay by his side – like glue. One can see, squeezed between world leaders, Israeli security elite actually hugging Netanyahu.

Netanyahu and his bodyguards knew they might not finish this symbolic walk on a Paris Sunday.
But nor would they hide in fear – as Barack Obama took cover eating  popcorn and watched a football game in the White House.

Jews do not hide anymore.
This is not the Paris of 1938.
We have Israel.
We have Netanyahu.