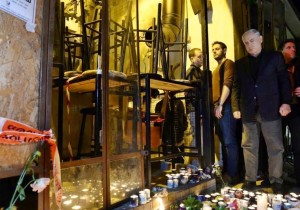 Tel Aviv, Israel — January 2, 2016 … The following was communicated by the Prime Minister’s Office to the Israel News Agency.

Prime Minister Benjamin Netanyahu, this evening, visited the murder scene on Dizengoff Street in Tel Aviv where he was briefed on the progress of the investigation by – inter alia – Public Security Minister Gilad Erdan and Israel Police Inspector General Roni Alsheich. The Prime Minister lit a memorial candle and spoke with one of the pub’s owners.

“Yesterday there was a heinous and unbelievably vicious murder here,” said Prime Minister Netanyahu. “Young people, whose entire lives were ahead of them, the ages of my own children, were innocently sitting celebrating a birthday and were murdered in cold blood. I would like to send heartfelt condolences to the families of those who were murdered and wishes for a complete and quick recovery to the wounded. We are praying for their well-being.”

“The Israel Police and ISA are working around the clock to apprehend the murderer. I just received a comprehensive briefing on their operations. They, the security forces of the State of Israel, are working to the best of their abilities. The photograph of the murderer has been published; additional photographs of him will also be published. We have reinforced our units in all relevant areas. I request that the public be on maximum alert.”

“I appreciate the condemnations of the crime that have been made by the Arab public. I must say that I expect all Arab MKs, all of them without exception, to clearly condemn the murder without hesitation. Murder is murder, and must be condemned and acted against from whatever quarter.”

“Among Israel’s Muslim citizens there are many elements that have come out against the violence and wish for full law enforcement in their communities. However, we all know that there is wild radical Islamic incitement against the State of Israel in the Arab sector. There is incitement in mosques, in the educational system and in social media. We are taking strong action against this incitement just as we did when we outlawed the Northern Branch of the Islamic Movement and the Mourabitoun. I am not prepared to accept two States of Israel, a state of law for most of its citizens and a state within a state for some of them, in enclaves in which there is no law enforcement and in which there is Islamist incitement, rampant crime and illegal weapons that are frequently fired at events such as weddings. This era has ended.” 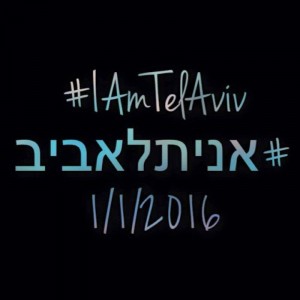 Netanyahu added: “I have formulated a plan, along with the Public Security Minister and the Israel Police Inspector General, a plan with a lot of money and resources. We will dramatically increase law enforcement services in the Arab sector. Israel will enforce the law and its sovereignty in all parts of the country – in the Galilee, the Negev and the Triangle, everywhere. We will build new police stations, recruit more police and go into all communities and demand from all of them loyalty to the laws of the state.”

“I view positively the increasing involvement in the IDF, in civilian service and in the overall life of the state, of the Christian, Druze and northern Bedouin communities, and within the Muslim community as well. I call on all citizens of Israel, especially its Muslim citizens, to take the path of integration, coexistence and peace and not the path of incitement, hatred and fanaticism. We are all citizens of the state and are all bound to maintain it and uphold its laws.”

Israeli anti-terror units went house-to-house Saturday in Tel Aviv, searching for the man suspected of murdering two people and injuring eight others in a shooting outside a pub.

Police have identified the suspect as Nasha’at Melhem, 31, an Arab-Israeli who lives in northern Israel.