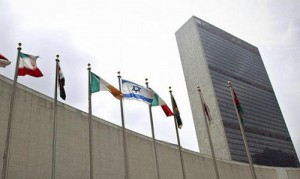 New York, NY — December 20, 2015 … It’s not a joke. The one international organization which loves to bash the Jews and their tiny democratic state – Israel – has declared Yom Kippur, the Jewish Day of Atonement, an official holiday.

Last Thursday the UN officially recognized Yom Kippur as an official holiday for the first time in its seventy year history. UN employees who are Jewish will have the day off and no official meetings are to take place on Yom Kippur.

The UN recognizes Christmas day and Good Friday as official religious Christian holidays and Eid al- Fitr and Eid al Adha as official Muslim holidays. Efforts for the UN to recognize Yom Kippur as an official holiday began three years ago by Ron Prosor, the former Israeli ambassador to the UN.

US Ambassador Samantha Power also played a crucial role in preventing the anti-Israel majority from blocking the resolution.

“Yom Kippur is the holiest day of the year for the Jewish people, and the U.N. should have recognized this holiday many years ago,” said Israeli Ambassador to the U.N. Danny Danon. “Today we finally have an official place for the Jewish religion in the world’s Parliament.”

The holiday is a day set aside to atone for sins and reflect on the year past and the year ahead. Yom Kippur lasts 26 hours, and many Jews choose to fast for the entire time. Many Jews also don’t bathe during Yom Kippur, and many abstain from cosmetics, deodorant and wearing leather shoes.

No mention was made by the U.N. that the ancient Yom Kippur ceremonies took place at the Temple in Jerusalem which is the capital of Israel.