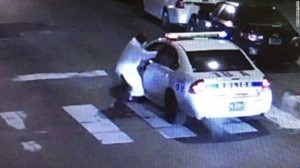 Philadelphia — January 9, 2016 … “Shots fired! … I’m bleeding heavily! I’m bleeding. Get us another unit out here!” It was with these words that another act of Islamic terrorism was announced to the world.

It was a Thursday evening at 11:40 p.m. when a man dressed in Islamic clothes approached the police car of Officer Jesse Hartnett and unloaded 13 bullets at Hartnett. The police officer survived the terror attack thanks to bending over in the car with his bullet proof vest. Three bullets ripped apart his left arm and with blood pouring out of a ruptured artery, Hartnett gave chase after Edward Archer, 30, who said that he committed the attack on behalf of ISIS.

“I follow Allah. I pledge my allegiance to the Islamic State and that’s why I did what I did,” Archer said, according to Clark.

“He believed that the police defend laws that are contrary to the teachings of the Quran,” Commissioner Ross said.

Archer, who is from a Philadelphia suburb, traveled to Saudi Arabia in 2011 and Egypt in 2012, FBI Special Agent Eric Ruona said.

Travel to Saudi Arabia is normal for Muslims who are required once in their lifetimes to complete the Hajj pilgrimage to Mecca.

But yet with the attacker’s confession and the FBI stating that he has traveled to the Middle East, Philadelphia Mayor Jim Kenney said the shooting had nothing to do with Islam. “It is abhorrent,” he said. “It does not represent the religion in any shape or form or any of the teachings.”

It appears that Kenney is more concerned with the image of Islam than of the safety of the civilians and police officers he has sworn to protect.

Kenney’s words parrot Barack Obama. Never admitting that the United States has a problem with Islamic terrorism. Never mentioning the words “Islamic terrorism”. And if anything, minimizing the real threat posed by this “JV team” in the Middle East.

After Islamic terrorists carried out the deadly attacks in Paris, the DNC released an ad hitting Republicans from George W. Bush to Donald Trump and Sen. Ted Cruz (R-TX) for even using the word “Islam” while talking about terrorism.

“Democrats seem determined to defend Islam more than America,” Gov. Mike Huckabee told Breitbart News. “No one in the GOP blames all Muslims but no one in the DNC blames any Muslims, even the ones who shout Allah Akbar just before cutting off the head of a person who professes being a Christian.”

The terrorism in Philadelphia comes at a time of heightened fears about terrorism nationwide, occurring a little more than a month after a husband-and-wife pair in San Bernardino, Calif., murdered 14 people in what was later deemed a terror attack. Shortly after the shooting, the female attacker there went on Facebook and said they both pledged allegiance to the Islamic State’s emir, Abu Bakr al-Baghdadi.

And hours before the shooting in Philadelphia, federal prosecutors announced that two Palestinian men who were born in Iraq and came to the United States as refugees had been charged as part of terrorism investigations.

Many truly understand the need not to place blame on the entire Muslim community. Like any religious group, it has it good and bad. And the last thing we want to do is alienate the majority of moderate Muslims and corner them into bonding with Hamas, Islamic Jihad, al-Qaeda, Hezbollah and ISIS.

Donald Trump’s recent proposed ban against all Muslims entering the United States is what we don’t want to do. But at the same time we must not ever be in denial as to where the roots of this terrorism comes from.

While working as a Captain in the Israel Defense Forces, I had the good fortune to work with Lt. Col. (res.) Jonathan Dahoah-Halevi. Today, Yoni is a senior researcher of the Middle East and radical Islam at the Jerusalem Center for Public Affairs. He is a co-founder of the Orient Research Group Ltd. and is a former adviser to the Policy Planning Division of the Ministry of Foreign Affairs.

It was back in 2003, Yoni called me over to his computer and said: “look what I found.”

It was an Al- Farouq website, affiliated with Al-Qaeda, which just published a new book entitled: “39 Ways in The Sake of the Jihad”. The text was written by Mohammad Bin Ahmad Al-Salem. According to the author’s preface, the book was completed on 19 July 2003 in Saudi Arabia’s capital, Riyadh.

Yoni stated that it was evident from Al-Salem’s manner of writing that he represents the “Salafi” outlook, originating from Ibn Taymia and Mohammad Abd Al-Wahhab’s school of thought as well as other Saudian and Palestinian scholars affiliated ideologically with Al-Qaeda and the Taliban regime in Afghanistan.

“The Islam is under over-all attack waged by infidel forces”, the author asserts and finds in this the deep motive that urged him to write his book. The enemy, implying the U.S. and the Western world (including Israel), has taken over Moslem countries one after the other, thus pushing Islam into a defensive position.

The Islamic commandment of Jihad (holy war against the infidels – Jews and Christians) is the cure to the illness of the Islamic nation and in the eyes of Allah it is the first and foremost commandment for all Muslims striving to achieve victory and introduce the rule of Islam worldwide.

Al-Salem enumerates in his book 39 principles of the Jihad which one can take part in, and by doing so he gives the readers an opportunity to comprehend the broad meaning of the notion of Jihad as interpreted by Muslim scholars.

It’s way apparent that Philadelphia Mayor Jim Kenney and the many Democrats that he associates with never read these 39 principles of Jihad.

It’s apparent that the Mayor does not know that these 39 principles are all written in the Koran. There is a direct association between Islam and Islamic terrorism. Just ask Obama what the I in ISIL stands for.

Though Islam teaches  Muslims not to kill women, children, or the aged, Jihad is an unlimited offensive to bring the whole world under Islamic law. As such Islamic terrorists are changing their tactics but their roots remain the same.

We don’t have the PC luxury to say: “It does not represent the religion in any shape or form or any of the teachings.” We cannot delete the words “Islamic terrorism” or “radical Islam” from FBI counterterrorism training manuals.

We can no longer afford to continue “reaching out” to Iran wishing for “good faith” on nuclear deals while they wish death to the United States and fire missiles at the US Navy.

We can no longer afford to hear the words “Free Palestine” and think they are referring to land and borders.

Saying the words “Islamic terrorism” is not hate speech. It is free speech which enables global law enforcement to investigate and locate those who seek our very destruction.

We can no longer bury our heads in the sand. If we do, we might just lose them.