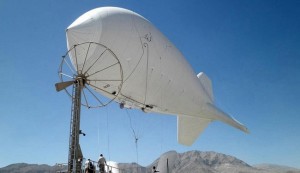 Jerusalem, Israel — November 19, 2014 … Part of the following was communicated by the Israel Prime Minister’s Office to the Israel News Agency.

Israel Prime Minister Benjamin Netanyahu, today visited the new command center of the Jerusalem Municipality observation unit, which operates observation balloons throughout Jerusalem and gives the municipality and the Israel Police real-time intelligence coverage of disturbances and violations of the law.

Jerusalem Mayor Nir Barkat briefed Prime Minister Netanyahu on this special unit, which serves as the aerial operations branch of the municipality, the Israel Police and the enforcement authorities, and on the way in which it assists the security agencies that operate in eastern Jerusalem in locating disturbances, large-scale gatherings, demonstrations, and the throwing of stones and firebombs.

“I am impressed by the genuine effort to market our capabilities, both to protect and to intervene in real-time against disturbers of the peace and terrorists,” said Netanyahu.

“No effort is spared here; this has great effect. This morning we demolished the home of an Islamic terrorist. This is a significant and important step and there will be more home demolitions; there will be many more steps. We have nothing against the residents of Arab communities in Jerusalem but we will not tolerate attacks on our Jewish citizens and we will act against those who do these things and against those engaged in incitement. With a determined and vigorous hand, we will restore security to Jerusalem.”

Jerusalem Mayor Barkat said: “Mr. Prime Minister, first of all, thank you for coming to the command center. Your interest is very important here because we know that with your support we will be able to boost personal security for the residents of Jerusalem.”

“I think that what has been formulated in recent days, with your help and that of the Israel Police, is a concept that will undoubtedly and dramatically increase our ability to respond to what we, unfortunately, experience in the city of Jerusalem. We had a very, very difficult day yesterday but we are looking forward and know that we will overcome and cope. You have seen what we are planning, what happens in the municipal command center, and I am pleased that you are here. It is good that you are backing us.”