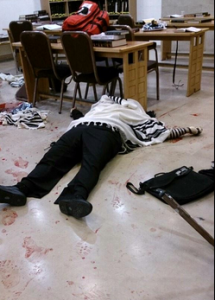 Jerusalem — November 18, 2014 … In one of the most twisted news reports I have ever witnessed from a “Western” based media outlet, MSNBC blamed Israel today for the bloody, Islamic terror attack in Jerusalem.

Jihadists attacked innocent Jews at prayer in Jerusalem today with a pistol, an axe and a knife. They murdered four Rabbis and critically wounded several others.

MSNBC in reporting the barbaric attack stated that it was the result of Palestinians being “unhappy with their lives” in the West Bank.

What planet are the producers of MSNBC on?

The Israeli Arabs on the West Bank enjoy democracy – prosperity and freedoms found no where else in the Middle East. They are treated as equal citizens with Jews and Christians. They enjoy freedom of speech, freedom of religion and work opportunities unmatched in Syria, Iran, Saudi Arabia,Qatar and Jordan.

So what prompted these Islamic terrorists to attack innocent Jewish civilians at prayer this morning? Islamic Jihad.
The same disease that ISIS suffers from. A holy war against Jews and Christians.

Hamas, based in Gaza, coordinated the attacks with the Popular Front for the Liberation of Palestine (PFLP). These groups do not complain about “quality of life” as they receive billions of dollars from Qatar. They are strictly motivated by extreme Islamic beliefs to murder all Infidels – Jews and Christians. 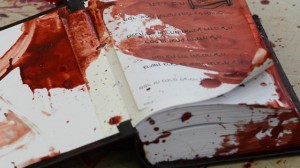 MSNBC seriously needs to do a simple Google search on Islamic Jihad and stop blaming the Jews for all the problems in the Middle East. Their producers need to spend some time with Hamas, ISIS and the PFLP and ask them why they are beheading American humanitarians in Syria and Iraq? Why their brothers are beheading innocents in the UK, Canada, Africa and the US?

Until then, MSNBC has blood on their hands as they are providing a rationale, an excuse for Islamic fanatics to attack and murder innocent civilians with bombs, knives and axes.

It’s not about occupation of land.
It’s about a global holy war to murder Jews and Christians!