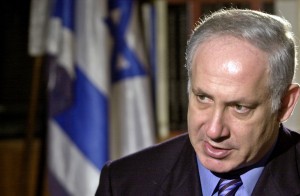 Jerusalem, Israel — November 24 … Part of the following was communicated by the Prime Minister’s office to the Israel News Agency.

Israel Prime Minister Benjamin Netanyahu was interviewed today on the BBC and made the following remarks:

“No deal is better than a bad deal. The deal that Iran was pushing for was terrible. The deal would have left Iran with the ability to enrich uranium for an atom bomb while removing the sanctions.”

Netanyahu added: “The right deal that is needed is to dismantle Iran’s capacity to make atomic bombs and only then dismantle the sanctions. Since that’s not in the offing, this result is better, a lot better. I think Iran should not have any capacity to enrich. There’s no right to enrich. What do you need to enrich uranium for if you’re not developing an atomic bomb? They are. How do we know that? Because they’re developing intercontinental ballistic missiles. What do you do with such missiles? The only reason you build ICBMs is to launch a nuclear warhead.”

“So Iran, I think everybody understands, is unabashedly seeking to develop atomic bombs and I think they shouldn’t have the capacity either to enrich uranium or to deliver nuclear warheads. And I think that’s the position that the P5+1, the leading powers of the world, should take.”

“Netanyahu concludes: “What is the justification of not taking this position? They say, well, it offends Iranian pride. So what? I mean, if this position was taken in the 1930s against Germany, it would have offended German pride, but it would have saved millions and millions of lives.”

“You do not want to give this medievalist regime in Iran, that throws acid in the faces of women, that oppresses gays, that subjugates an entire population, that exports terrorism far and wide – don’t give these violent medievalists atomic bombs. That’s not a good thing for the future of the world and its security.”

“I hope that the economic pressures continue. I mean, the fact that there’s no deal now gives an opportunity to continue the economic pressures that have proven to be the only thing that brought Iran to the table, to continue them, to toughen them. I think that’s the road that has to be taken. Israel is watching very carefully what is happening here. And Israel always, always reserves the right to defend itself.”

The Israel Prime Minister welcomed the decision today to extend nuclear talks between Iran and world powers, saying that the deal Tehran was pushing for was dangerous to Europe, the Middle East and North America and extending the negotiations was a much better and practical option.