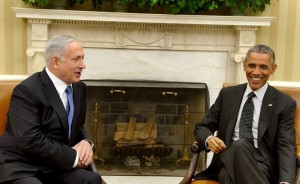 Washington — October 1, 2014 … The following was communicated by the Israel Prime Minister’s Office to the Israel News Agency.

Following are the remarks by US President Barack Obama and Israel Prime Minister Benjamin Netanyahu at the start of their meeting earlier today  at the White House.

“Well, it’s good, once again, to welcome the Prime Minister of Israel, Bibi Netanyahu. Obviously he’s no stranger to the White House. I think I’ve met with Bibi more than any world leader during my tenure as President.

We meet at a challenging time. Israel is obviously in a very turbulent neighborhood, and this gives us an opportunity once again to reaffirm the unbreakable bond between the United States and Israel, and our iron clad commitment to making sure that Israel is secure.

You know, throughout the summer, obviously, all of us were deeply concerned about the situation in Gaza. I think the American people should be very proud of the contributions that we made to the Iron Dome program to protect the lives of Israelis at a time when rockets were pouring into Israel on a regular basis.

I think we’ve also recognized that we have to find ways to change the status quo so that both Israeli citizens are safe in their own homes and school children in their schools from the possibility of rocket fire, but also that we don’t have the tragedy of Palestinian children being killed as well, and so we’ll discuss extensively both the situation of rebuilding Gaza but also how can we find a more sustainable peace between Israelis and Palestinians.

Our agenda will be broader than that, obviously. I’ll debrief Bibi on the work that we’re doing to degrade and ultimately destroy ISIL and the broader agenda that I discussed at the United Nations, which is mobilizing a coalition not only for military action but also to bring about a shift in Arab states and Muslim countries that isolate the cancer of violent extremism that is so pernicious and ultimately has killed more Muslims than anything else.

And we’ll also have an opportunity to discuss the progress that’s being made with respect to dealing with Iran’s nuclear program, which obviously has been a high priority for not only Israel but also the United States and the world community. So we have a lot to talk about and I appreciate very much the prime minister coming. It’s challenging, I think, for an Israeli Prime Minister to have to work so hard during Rosh Hashana and Yom Kippur, but I know that the prime minister’s utmost priority is making sure that his country is safe during these difficult times, and we’re glad that the United States can be a partner in that process. Thanks.”

“Mr. President, first, I want to thank you. I want to thank you for the unflinching support you gave Israel during our difficult days and difficult summer we had, expressed in so many ways, but also in an additional installment of support for Iron Dome, which has saved so many lives, saved many lives across the board, and I thank you for that and for the continuous bond of friendship that is so strong between Israel and the United States.

I also want to thank you for this opportunity to meet with you and to discuss the enormous challenges facing the United States and Israel in the Middle East. There’s definitely a new Middle East. I think it poses new dangers,but it also presents new opportunities. As for the dangers, Israel fully supports your effort and your leadership to defeat ISIS. We think everybody should support this.

And even more critical is our shared goal of preventing Iran from becoming a military nuclear power. As you know, Mr. President, Iran seeks a deal that would lift the tough sanctions that you worked so hard to put in place and leave it as a threshold nuclear power, and I fervently hope that under your leadership that would not happen.

Equally, I think that there are opportunities, and the opportunities, as you just expressed, is something that is changing in the Middle East, because out of the new situation there emerges a commonality of interest between Israel and leading Arab states, and I think that we should work very hard together to seize on those common interests and build a positive program to advance a more secure, a more prosperous and a more peaceful Middle East.

I remain committed to a vision of peace of two states for two peoples, based on mutual recognition and rock-solid security arrangements on the ground. And I believe we should make use of the new opportunities, think outside the box, see how we can recruit the Arab countries to advance this very hopeful agenda. And I look forward to our discussions on these and many other matters”.