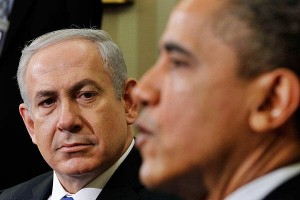 Washington, D.C. — October 2, 2014 …  US President Barack Obama criticized Israel Prime Minister Netanyahu at the White House yesterday warning  him not to proceed on “proposed settlements in a disputed part of east Jerusalem.”  The White House then issued a press statement on “Israel settlements” hours after Obama met with Netanyahu.

The White House stated: “This development will only draw condemnation from the international community, (and) distance Israel from even its closest allies.”

Netanyahu, in an interview yesterday with Univision responded:

“This isn’t a settlement. These are neighborhoods in Jerusalem, the capital of Israel,” said Netanyahu.

“If you said to me that in some city in the United States or in Mexico, or anywhere else, Jews cannot buy apartments, there would be an uproar. You know, there’s not only the freedom of property, but the right of every individual to live where they want, as long as they purchase the apartment legally and don’t expropriate, don’t take over, which isn’t the case here. This was a free transaction.”

“So I just want to understand this policy. It flies in the face of American values, and it flies in the face of common sense.” (In his MSNBC interview, the Israel Prime Minister added that the criticism was leveled at a mixed neighborhood in which a large portion of the approved construction will be designated for Arab residents alongside Jewish residents.)

The Union of Orthodox Jewish Congregations of America, the largest Orthodox Jewish umbrella organization in the US, strongly rejected statements made by White House Press Secretary Josh Earnest and State Department Spokesperson Jen Psaki with regard to Israeli plans for housing construction in the Jerusalem neighborhood of Givat HaMatos and Israeli Jews purchasing houses in the neighborhood of Silwan.

Commenting on these matters, Earnest stated: “This development [in Givat HaMatos] will only draw condemnation…” and “It also would call into question Israel’s ultimate commitment to a peaceful negotiated settlement with the Palestinians.” He further condemned “the recent occupation of residential buildings in the neighborhood of Silwan by people whose agenda provokes tensions, it only serves to escalate tensions.” Ms. Psaki stated: “This development will only draw condemnation from the international community, distance Israel from even its closest allies [and] poison the atmosphere…”

“We reject yesterday’s harsh statements by the Obama Administration. First, they suggest that the onus for the peace process impasse is upon Israel, when in fact it is decades of Palestinian and Arab rejectionism and incitement (such as that voiced by Palestinian President Abbas at the UN General Assembly last week) that “poisons the atmosphere” for peace. Israel has demonstrated its interest in peace, not merely through words but through deeds, time and again.

Second, suggesting that Jews residing in neighborhoods of Jerusalem—the historic capital of Israel and the Jewish people—is “provocative” is offensive. It is also fundamentally at odds with the notion that differences over Jerusalem are to be resolved in negotiations.

Finally, the implied threat that Jewish residences in Jerusalem will “distance Israel from even its closest ally”—i.e., the United States—is a resort to rhetoric which is entirely unacceptable.

We appreciate the constructive conversation President Obama had yesterday with Prime Minister Netanyahu and the President’s restatement of his “unshakable” commitment to Israel’s security, which has been manifested in many practical ways. Yesterday’s statements by Administration spokespeople run counter to such a useful and productive working relationship.”