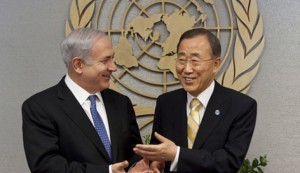 New York — September 30, 2014 … The following was communicated by the Israel Prime Minister’s Office to the Israel News Agency.

Prime Minister Benjamin Netanyahu and Israel Foreign Minister Avigdor Liberman, met today at the UN offices in New York with UN Secretary General Ban Ki-moon. The Prime Minister said that Iran is continuing to work towards achieving the ability to arm itself with nuclear weapons.

Prime Minister Netanyahu said that the residents of Gaza had been taken hostage by Hamas and compared Hamas to ISIS.

Netanyahu added that Hamas had perpetrated a double war crimeby using the residents of Gaza as human shields and deliberately firing at the residents of Israel. He said that he does not intend to apologize for the fact that Israel has Iron Dome to protect its citizens.

Prime Minister Netanyahu complained that the UN Human Rights Council is not focusing its inquiry on Hamas, which used UN facilities in order to fire at Israel, and asserted that Israel would struggle against this. He added that the council was biased against Israel and defends Hamas.

Prime Minister Netanyahu declared that there was no justice in the fact that the standard applied to Israel was different than that applied to other countries and pointed out that 200,000 civilians have been slaughtered in Syria. He said that the UN’s conduct toward Israel was disproportionate and stressed that Israel did not direct its attacks against civilians, adding that we regret any harm done to innocent civilians.

The Israeli Prime Minister also commented on the arrangement that was achieved with the UN on the entry of humanitarian supplies for the residents of Gaza.

Prime Minister Netanyahu said that there has been no change in his stance on a demilitarized Palestinian state that would recognize the Jewish state, and on security arrangements that would allow Israel to defend itself by itself against any threat. He added that the conflict with the Palestinians was not about the settlements but about the Jewish state’s right to exist.

Prime Minister Netanyahu pointed out that Hezbollah was in violation of UN Security Council Resolution 1701 by continuing to build up its arsenals.