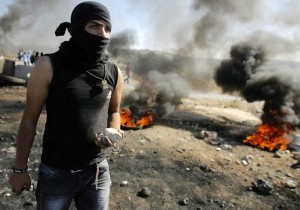 “Stones and firebombs are deadly weapons; they kill and have killed. Therefore, in recent days we have changed the open-fire orders for police in Jerusalem.”

Netanyahu added: “Already over the weekend they used the new measures under the new orders and immediately hit those throwing stones and firebombs. Today we will facilitate an additional expansion of the ability of the police to foil the throwing of stones and firebombs and we will continue to add forces in order to strike at rioters under a simple principle that we will begin to implement around and within its borders: Whoever tries to attack us, we will hurt him.”

“We have also started to quickly advance legislation to impose fines on the parents of minors who throw stones and firebombs. No less important in my view is the advancing of legislation to set minimum punishments for those who throw stones, firebombs and fireworks. We cannot accept the principle that in Jerusalem our capital, or in any part of the State of Israel, in the Galilee or in the Negev, that people will organize terrorism and begin to stone passing cars or throw stones and murder people.”

“This norm will not be established here; rather an opposite norm will – we will act against you and stop you, and we will punish you with the full force of the law. We seek to instill this norm for all Israeli citizens, residents and those under Israel’s jurisdiction. With all due respect to the courts, it is our right and our duty to establish this norm; just as we did in regard to sex crimes, we will set minimum punishments for those who throw stones and firebombs.”

“I would like to take this opportunity to express deep appreciation for the police. It is fighting against these phenomena under conditions that are not simple. The Israel Public Security Minister and I visited with the police. I was impressed by their determination and their readiness to act and I thought that it would be proper for the government to allow the police to act in order to protect Israel’s citizens.

“I would like to say something about the Temple Mount. Israel is committed to maintaining the status quo. We are not altering the status quo. Elements that incite with baseless, wild provocations – to the effect that Israel is trying to prevent Muslim prayer on the Temple Mount or wants to destroy the mosques, or other wild things that are being said – it is they who are inciting. This incitement comes from the Muslim Brotherhood, the Islamic Movement in Israel, Hamas, and – to our chagrin – with the active participation of the Palestinian Authority.”

“Therefore, if someone complains about the development of this situation, they would do best to direct their criticism, not towards Jerusalem, but rather towards Ramallah, Gaza and agitators in the Galilee, and unfortunately, towards Turkey, from which incitement issues forth on a daily, even hourly, basis, not only the throwing of firebombs, but also something new – bringing explosives and pipebombs onto the Temple Mount. Explosives in the Al-Aqsa Mosque are explosives.”

“Explosives in Al-Aqsa Mosque – that is changing the status quo. Israel will maintain the status quo. It will act responsibly, but with determination, to ensure that the existing arrangements are maintained. We have no plans to change them, but we also have no intention of allowing anyone to cause the deterioration of the arrangements on the Temple Mount by resorting to explosive and widespread violence.”

Netanyahu concluded: “On this issue I call on the public, the heads of political parties, to unite behind the Government’s determined and responsible action on the Temple Mount, in Jerusalem and throughout the State of Israel. By taking determined action over time, we will restore quiet.

I would like to take this opportunity to say may you, the entire people of Israel, all be inscribed for a good year.”

Twenty-seven Palestinian suspects accused of throwing rocks and firebombs at Israeli police in flashpoint Arab neighborhoods of Jerusalem were arrested during an overnight police sweep that started late Saturday night.

The crackdown brought the total number of arrests over the last 48 hours to 39.

From Friday to Saturday afternoon, 12 Palestinians were arrested for attacking Israeli Border Police officers with firebombs in Jebl Mukaber, and rioting in Shuafat, Isawiya, Wadi Joz and Ras el-Amud.