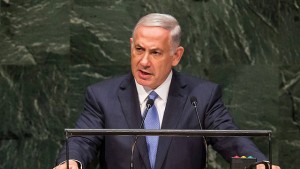 Jerusalem, Israel — September 29, 2015 … Part of the following was communicated by the Prime Minister’s office to the Israel News Agency.

Prime Minister Benjamin Netanyahu and his wife Sara, this afternoon left on an official visit to the UN General Assembly in New York.

“I am now leaving for the US where I will address the UN General Assembly,” said Netanyahu.

In my speech, I will – of course – refer to our policy vis-à-vis Syria and the dangers on our northern border. The following day I will meet with United States Secretary of State John Kerry and will discuss with him the strengthening of Israel’s security. We will also discuss the peace process.”

Netanyahu continues: “Israel desires peace with the Palestinians who, to my regret, are continuing to spread gross lies about our policy on the Temple Mount in our capital, Jerusalem. I will demand a halt to this wild incitement. Israel is committed to the status quo; Israel is maintaining the status quo. It is the Palestinian rioters who are bringing war material, pipe bombs and explosives onto the Temple Mount who are harming the sanctity of the place and it is they who are violating the status quo.”

“Indeed, with every passing day it is clear that within the collapsing Middle East Islamic extremists are capturing more and more territory. Israel is an island of progress and stability. I will say all of this and more at the UN General Assembly and in my meetings in the US.”