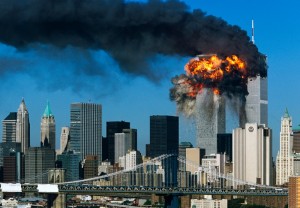 What have we learned in 14 years?

New York — September 10, 2015 … You don’t buy a knife for someone who wants to murder you. You don’t give 150 billion dollars to a terror state, Iran, which chants “Death To America”.

If you do give 150 billion dollars to a terror state which has taken Americans hostage, which continues to imprison Americans because they are American, you do so because you are losing the war against Islamic Jihad.

Islamic Jihad means “holy war” against Christians and Jews. It is written as such in the bible of the Muslims – the Quran.

It is practiced by the government of Iran.

When Muslims wage Jihad they place no deadline on winning the war.
It can take weeks, months or years. Iran has been waging Jihad against the United States since 1979 and today, as they chant Death To America, the President of the United States wants to reward them, appease them by lifting all sanctions and giving them 150 billion dollars.

Where will the 150 billion dollars go?

It will go to Islamic terror cells in Europe, Africa and the United States.
It will go to attacking Christians and other minorities in Iraq and Syria.

It will go to Iran building ICBM’s –  intercontinental ballistic missiles – these are missiles whose only purpose is to attack the United States.

Are we paranoid, war mongers or is the Iranian threat real?

Less than 21 percent of Americans want the Iran Deal or now better known as the Jihad Deal.
They know it is buying a knife for someone who wants to murder you or just simply fly airplanes into American office buildings.

Jihad cannot be defeated by giving it’s lethal campaign 150 billion dollars.
It can be defeated through the use of continued economic sanctions.

One must ask two very simple questions.
Why is President Obama giving Iran 150 billion dollars?
What does America get in return?

Obama and his friends will say that the US will get “peace”.
That is not what Iran is saying today.

“We welcome war with the U.S. as we do believe that it will be the scene for our success to display the real potentials of our power,” Brig. General Hossein Salami said in an interview on state-run Iranian television.

Who do you believe?
The threats of our enemies or the promises of our friends?

Bin-Laden is smiling as Iran is about to receive 150 billion dollars from the US and the means to create a nuclear bomb.

Who is winning the war?
Why is the free, proud, democratic United States of America committing suicide?