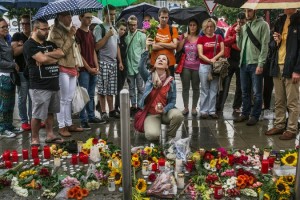 Jerusalem, Israel — July 23, 2016 … The following statement was communicated by the Israel Prime Minister’s Office to the Israel News Agency.

“Israel sends condolences to Germany over the murder of innocent citizens in the tragic shooting attack that occurred in Munich on Friday and wishes the wounded a quick recovery. Israel stands alongside Germany on this sad day.”

Jerusalem reached out to her friends after the third mass attack in Europe in little over a week, after the killings of 84 people in Nice, France, and an attack by a young refugee wielding an ax and a knife in Germany that left five people wounded.

In contrast to the first two attacks, the one in Munich appears to have had no links to ISIS or other Islamic terrorist groups. Nor was the terror attack directly linked to the wave of migration that has fueled racial, ethnic and religious tensions in Germany and across Europe.

The attacker in Germany, Ali Sonboly used a 9-millimeter Glock handgun, and hundreds of rounds of ammunition for it. The rampage started at 5:52 p.m. on Friday, at a McDonald’s in Munich a few miles from where he lived with his mother, father and brother.