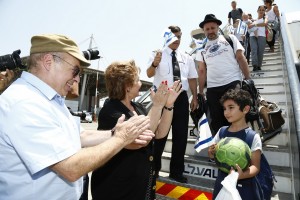 Tel Aviv, Israel — July 22, 2016 … More than 200 French Jews arrived in Israel today (Wednesday, July 20) aboard a special Aliyah (immigration) flight organized by The Jewish Agency for Israel in partnership with the Ministry of Aliyah and Immigrant Absorption and Keren Hayesod-UIA.

Upon their arrival at Ben-Gurion Airport, they were greeted by Chairman of the Executive of The Jewish Agency for Israel Natan Sharansky, Minister of Aliyah and Immigrant Absorption Sofa Landver, and Chairman of Keren Hayesod-UIA Eliezer (Moodi) Sandberg. Prime Minister Benjamin Netanyahu addressed the festive gathering by video.

Today’s arrival was the largest Aliyah flight from France set to land in Israel this summer. Half of the new immigrants are teenagers, children, and toddlers who will join the Israeli education system at the end of the summer vacation. One such child, Eva Levy, celebrated her ninth birthday today and was called onto the stage with her parents and siblings to receive a surprise birthday cake and gifts from Chairman Sharansky and Minister Landver. The immigrants also include several families in which three generations—grandparents, parents, and children—made Aliyah together. The majority of the immigrants will make their homes in Netanya, Raanana, Jerusalem, and Ashdod. The flight was planned months ago, without any connection to recent events in France. 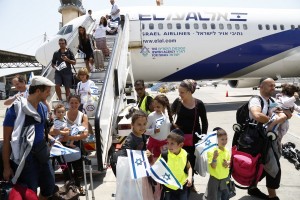 Chairman of the Executive of The Jewish Agency for Israel Natan Sharansky said:“Many have questioned whether Jews have a future in France, but there is no question that French Jewry has a future in Israel. You could have chosen to go many other places, but you chose to come here. Each of you has taken a tremendous step for your children’s future and for the future of Israel. Welcome home!”

The French Jewish community is the largest in Europe and the second-largest in the world outside of Israel, numbering just under half a million Jews.

French Jewish immigration to Israel has surged since the year 2012, breaking records for Aliyah from France and from Western countries more generally. 2014 marked the first time in Israel’s history that over 1% of a Western Jewish community made Aliyah in a single year, an achievement repeated in 2015, with the arrival of some 7,800 immigrants from France – the most ever. In total, nearly 10% of the French Jewish community has immigrated to Israel since the year 2000, half in the past five years alone.

In response to this unprecedented demand from French Jews, The Jewish Agency and the Ministry of Aliyah and Immigrant Absorption have developed a special plan to facilitate Aliyah from France and ease French Jewish immigrants’ integration into Israeli society. The plan includes efforts to deepen young French Jews’ Jewish identity, bring them to experience Israel on a variety of programs, provide French Jews with comprehensive Aliyah information and counseling, remove barriers to employment, and increase the number of Jewish Agency shlichim (representatives) in France.