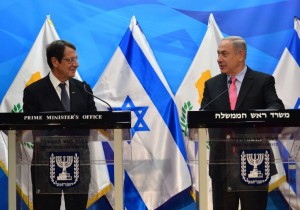 Jerusalem, Israel — July 24, 2016 … Israel Prime Minister Benjamin Netanyahu made the following statement today from his office in Jerusalem at the start of his meeting with Cyprus President Nicos Anastasiades:

“Cyprus and Israel are two small democracies in the eastern Mediterranean. We also share common challenges, and also common opportunities:in security cooperation, in gas, in emergency cooperation, commerce, tourism, many, many fields.

I will never forget that in 2010, when we faced a ferocious forest fire in the Carmel Forest, the first country I called was Cyprus. If offered to send a plane. It did send it, and I was privileged to reciprocate last month when you faced a ferocious forest fire, and we sent our planes to extinguish your flames. Back in April, our two nations, along with Greece, conducted a joint fire-fighting exercise to enhance our regional cooperation in emergency situations.

And that’s exactly the kind of thing that friends do. They come to each other’s help in times of need, but also cooperate in good times or cooperate to make times better. And that’s why I’m particularly proud to have this opportunity to continue the dialogue we began on a tripartite basis in the Nicosia summit. We’re continuing those discussions, both bilaterally but also multilaterally, and we continue to send our people.

But of course we know, as leaders, that there’s no substitute for the meeting of the people at the top, so in this spirit, I welcome you once again.” 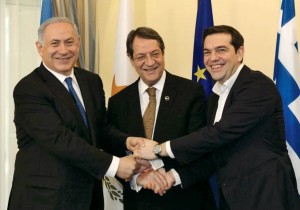 At the conclusion of their meeting, Netanyahu and Anastasiades issued a joint statement:

“The Prime Minister of Israel, Benjamin Netanyahu and the President of Cyprus, Nicos Anastasiades, held wide ranging discussions that reflected the close and very important relations both countries enjoy.

In the course of the discussions, both leaders emphasized their shared interests in regional stability and expressed their agreement to continue countering sources of extremism and terrorism.

The two sides continued their talks about emergency response cooperation.  Both leaders encouraged their teams to conclude these talks as soon as possible.

The two sides discussed the unitization issue regarding the Aphrodite and Yishai gas fields, and concluded that by September 2016 the two Energy Ministers will seek to finalize these discussions.

In the context of the exploration and development of energy resource in the eastern Mediterranean, both leaders concluded that there is no question that resolving the outstanding issues between Cyprus and Turkey would greatly facilitate the pace of the development of future projects, which will proceed according to international law, as well as greatly enhance stability in the region.  Therefore, Israel has a strong interest in the resolution of this issue.

Both leaders stressed the importance of the trilateral framework between Israel, Cyprus, and Greece and reconvening together by the end of the year, as was agreed between the parties at the Nicosia Summit, on January 28, 2016.”