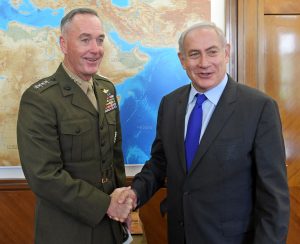 Jerusalem, Israel — May 9, 2017 … Israel Prime Minister Benjamin Netanyahu and IDF Chief-of-Staff Lt.-Gen. Gadi Eisenkot, this afternoon met with US Chairman of the Joint Chiefs of Staff Gen. Joseph F. Dunford and discussed the continued deepening of bilateral security relations as well as the common challenges.

Gen. Dunford: “Thanks, Mr. Prime Minister. I’m back, as you know, for my third time since I’ve been in this assignment to not only work on our overall relationship, but to work on my personal relationship with General Eisenkot, which is rock-solid and probably representative of the broader relationship that we have.”