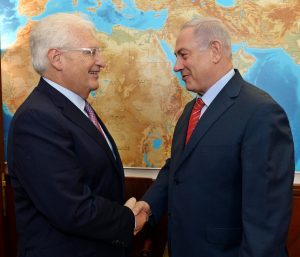 Jerusalem, Israel — May 16, 2017 … Prime Minister Benjamin Netanyahu met today with US Ambassador to Israel David Friedman at the Prime Minister’s Office in Jerusalem.

“Welcome. It’s a pleasure to see you and to welcome you to Jerusalem, our eternal capital,” said Netanyahu. “I know you went to the Kotel [Western Wall]. It’s deeply appreciated by all our people.”

US Ambassador Friedman responded: “There was no other place to go.”

Netanyahu, who denied FOX News reports yesterday that he did not want the US embassy in Tel Aviv to move to Jerusalem said: “It was a strong gesture of solidarity. We look forward to receiving President Trump and we want to work with you and with the President these coming years to strengthen our great alliance.”

As Friedman arrives in Jerusalem, less than a week before President Donald Trump arrives in Israel, the White House has been forced to comment over reported comments by US diplomat describing the Western Wall in Jerusalem’s Old City — one of Judaism’s holiest sites — as being in the “occupied West Bank”.

The Israeli Prime Minister’s office said it was shocked by the comments and said it had asked the White House to explain what was meant by them.
According to Israel’s Channel 2 News, a member of the US delegation preparing for Trump’s visit made the comment about the Western Wall when Israeli officials suggested a photographer shoot video of the President during his visit to the site.
The Israeli delegation were reportedly told that the President’s visit to the site was private and that he did not want Netanyahu to accompany Trump there; the American official reportedly added that Israel did not have jurisdiction over the area.
The Americans then asked the Israeli delegation to leave from where they were standing by the Western Wall, that it did not belong to them, it was none of their business and they were not welcome there.
A shouting match between the US delegation and the Israeli delegation then began.
The US delegation walked away from the Israelis and visited other sites in Jerusalem’s Old City.
“Israel is convinced that this statement is contrary to the position of President [Donald] Trump, as expressed in his firm opposition to the most recent UN Security Council Resolution,” the Israeli Prime Minister’s Office said in a written statement Monday.

A White House spokesman later said: “These comments were not authorized by the White House. They do not reflect the US position, and certainly not the President’s position.”

The US embassy in Israel said it had no comment.
The Israel News Agency places great faith in US Ambassador David Friedman to educate his Consular staff in Israel in the history of Jerusalem and to update both his Israeli staff and those coming from Washington that Jerusalem has been and remains Israel’s undivided biblical, historical, cultural and legal capital.
UPDATE: The White House just announced that Prime Minister Netanyahu will not be welcome at the Western Wall as Trump visits the Jewish holy site.
Gen. McMaster said that “no Israeli leaders” will accompany Trump to the Western Wall.
“He’s going to the Western Wall mainly in connection with the theme to connect three of the world’s great religions…and to highlight the theme that we all have to be united against the enemies of all civilized people.”
INA: The Western Wall is a JEWISH holy site.
Copyright © 2017 Israel News Agency All rights reserved