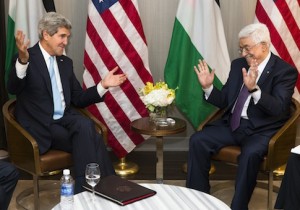 Let us recall the first time Kerry betrayed Israel. Shortly after he was appointed Secretary of State, he initiated Israeli-Palestinian negotiations he believed could end a one-hundred year-old conflict in nine months.

Though Israel had previously frozen Jewish construction in Judea for ten-months as part of a U.S. attempt to initiate negotiations, and although the Palestinian Authority still refused to negotiate, Kerry urged Israel to again to take “confidence building measures” to bring the Palestinians to negotiate.

Of the options Kerry urged Israel to take – freezing settlements, agreeing to the principle of a return to the 1949 armistice lines or releasing terrorists – Israel chose the latter, believing it was the least harmful to Israel’s long-term security, since it did not prejudice the potential results of negotiations.

Having agreed to this concession and ultimately releasing a total of 78 convicted terrorist-murderers, Israel could assume that when the negotiations predictably soured, Kerry would stand with Israel. Instead, when PA President Mahmoud Abbas ditched negotiations and applied for membership in 15 international organizations, a move aimed at bolstering the Palestinian Authority’s statehood status without ceasing its violent conflict with Israel (violating the Oslo Accords), Kerry stabbed Israel in the back.

Speaking before Congress, Kerry said an Israeli announcement of settlement construction caused negotiations to go “poof,” even though Abbas had agreed to negotiate knowing that there would be no freeze. At about the same time, a senior unnamed U.S. official, later named as U.S. special envoy Martin Indyk, blamed settlements as the “main act of sabotage on the peace talks” and alleged that “Netanyahu would not yield an inch for peace” (never mind the released terrorists).

Now Kerry is at it again, only this time, he is not only stabbing Israel in the back metaphorically, he is lending a hand to those urging Palestinians to literally stab Israelis in the back.

Israel is currently fighting off a wave of terror which Kerry well knows was triggered and continues to be spurred on, in large part, by baseless allegations that Israeli intends to harm al Aqsa Mosque, or in the moderate language the Palestinians use to con naïve Westerners, “alter the status quo.”

The lie – or rather, blood libel – about Jewish intentions towards al Aqsa has been used countless times to instigate anti-Jewish violence going back to 1929, when Arab rioters who were incensed over such claims killed 133 Jews and injured hundreds more.

In the last few weeks, the libel has reached another crescendo, with calls from numerous Palestinian sources to “defend” al Aqsa.

Among those repeating the blood libel is Abbas himself.

In numerous public statements Abbas has praised “blood spilled” in defense of al Aqsa, warned of Jews’ and their “filthy feet” defiling the Mosque, and called to “strengthen” those who “defend al Aqsa.” Even his U.N. General Assembly speech began with the blood libel and a thinly-veiled threat to turn to terrorism over al Aqsa. Two days after the speech a wave of terror began.

While the U.S. is Israel’s primary ally, it is by now par for the course that when blood-thirsty terrorists attack Israel and Israel defends itself, the U.S. and the State Department especially, will not side with Israel, but will instead equate, issue statements of general concern, and urge “both sides” to “reduce tensions” and “show restraint.”

So it was no surprise that it did not back Israel now, when Palestinian teens are being urged by the highest levels of Palestinian society to commit heinous acts of murder.

Not content with the normally vague “even-handedness,” however, Kerry called Netanyahu, instructing Netanyahu to preserve the status quo at the Temple Mount “in word and deed,” implying that despite Netanyahu’s denials, in practice Israel was altering the status quo.

State Department spokesperson Mark Toner then further called on Israel to reduce tensions by, “[f]or one thing, upholding the status quo on Haram al Sharif-Temple Mount.” Again, the implication being that Israel was not already doing so.

Essentially, Kerry and his State Department have adopted Palestinian claims which Israel rightfully calls dangerous lies and which have historically, and which now are, goading Arabs to murder.

Kerry followed this up at a Harvard University event where he blamed Israeli settlement policies for the terrorism, saying, “There’s been a massive increase in settlements over the course of the last years and there’s an increase in the violence because there’s this frustration that’s growing.”

Leaving aside whether the “massive increase” claim is true, the Palestinians’ own focus is on al Aqsa and, since the stabbings began, the deaths of the Palestinian terrorists while they are attempting to murder Israelis.

The settlement claim not only marked another betrayal of Israel, but Kerry’s total misunderstanding of Palestinian violence.

In blaming Israel, but more specifically by repeating the al Aqsa blood libel, Kerry has put more Israelis at risk.

He has confirmed would-be killers’ rationalizations for violence and has also given Abbas diplomatic cover to continue making these wild claims, which will, in turn, yield further violence.

What basis Kerry and the U.S. have to share Abbas’s feigned concerns, and how Kerry could believe it would be prudent to air those concerns amidst a wave of violence, is not clear.

Whether due to stupidity, carelessness, or perhaps vindictiveness over Israel’s opposition to the nuclear accord with Iran, Kerry’s actions mean that this wave of terrorism will go on for longer than it otherwise would have, with more Palestinians youths grabbing their kitchen knives and more Jews being murdered or injured, and in the aftermath of it all, a new set of imagined Palestinian grievances against Israel.

Kerry also said at Harvard that he would be visiting Israel to try and renew talks. If so, he might consider what “confidence building measures” he can take to regain Israel’s trust. A public retraction of recent statements would be a start.

The author is a senior editor for the Israel News Agency, Likud Central Committee Member, an op-ed columnist for the Jerusalem Post and an attorney living in Jerusalem.