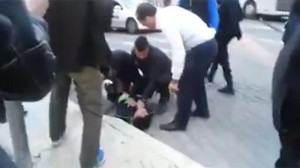 Security video of the terror attack shows Barkat (in white shirt)
grabbing the terrorist after he stabbed a Jewish man.

Jerusalem, Israel — February 22, 2015 … The Mayor of Jerusalem, Nir Barkat, upon seeing a terror attack take place on the streets of Jerusalem rushed the terrorist and wrestled him down to the ground.

The Islamic terrorist attacked an Orthodox Jewish man, stabbing him in the stomach. The Mayor, who was not armed, subdued the terrorist, a 18-year-old Arab teen, with the help of his bodyguard.

Barkat told reporters that he was walking to his office when his guards spotted the attack.
“We saw a terrorist with a knife standing and looking for the next thing to do,” he said.
Jerusalem Mayor Barkat can be seen in white shirt.

The Mayor described how a guard cocked his weapon, causing the attacker to drop his knife and allowing Barkat and his guards to overpower him. “It’s clear to me that if the terrorist had continued stabbing, he would not be alive right now. But because he dropped the knife we overpowered the terrorist, and I hope he is punished appropriately.”

Asaf Na’amani, the bodyguard who drew his gun, said: “From the moment we jumped out of the car, I noticed a terrorist armed with a knife trying to cross the street. I told him to drop the knife; he froze in place and then dropped it. The Mayor and I jumped on him and wrestled him to the ground. In our world, there’s no such thing as hesitation – there’s only yes or no.”

Mayor Barkat, 55, served as an officer in the paratroopers’ brigade. A former high-tech entrepreneur, he was elected as Israel’s mayor of Jerusalem in 2008. 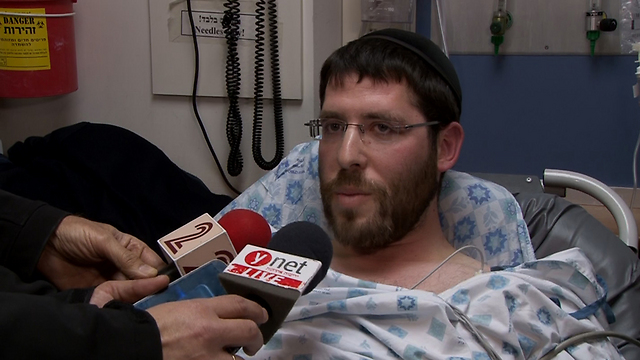 Abraham Goldstein, the victim, recalled the attack: “I felt a sharp blow in my stomach. I began shouting that there was a stabbing and that they should move away, then he came to stab me again and I blocked him with my tefilin.”

This is our Israel.

Under constant attack on our Northern and Southern borders, threatened by Iranian nuclear weapons but defended by an alert, intelligent, brave and dedicated leadership.
There is much that the US Congress can learn next week in terms of how to detect and respond to Islamic terrorism. First we call it what it is – Islamic terrorism – then we attack it with every asset we have. That’s how we neutralize terror threats and protect our children. That’s how we survive. From the Prime Minister of Israel to the Mayors of our cities to the soldiers and police who stand guard 24 hours a day, 7 days a week.