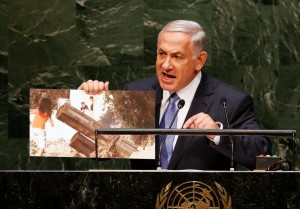 He again implored the global community to prevent Iran from acquiring nuclear weapons.

Netanyahu asked the global forum: “Would you allow ISIS to acquire chemical or nuclear weapons?”

Netanyahu then spoke about Operation Protective Edge, the IDF operation to protect Israeli civilians from terror rockets and tunnels. Netanyahu stated that the IDF is the most moral army in the world. 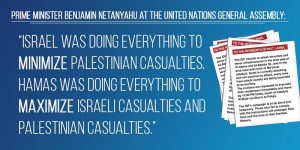 He accused Hamas of committing “the real war crimes” by using Palestinian civilians as human shields. He held a photograph of Palestinian children playing near rocket launchers in Gaza.

The Israel Prime Minister stated that Israel “faced a propaganda war because in an attempt to gain sympathy, Hamas used human shields, homes and hospitals to fire rockets at Israel while Israel surgically struck military targets.”

“Last week, many countries here rightly applauded President Obama for leading the effort to confront ISIS.  And yet weeks before, some of these same countries, same countries that now support confronting ISIS opposed Israel for confronting Hamas,” Netanyahu said.

“They evidently don’t understand that ISIS and Hamas are branches of the same poisonous tree.  ISIS and Hamas share a fanatical creed, which they both seek to impose well beyond the territory under their control,” he said.

Netanyahu concluded: “Together, we must recognize the global threat of militant Islam, the primacy of dismantling Iran’s nuclear weapons capability, and the indispensable role of Arab states in advancing peace with the Palestinians.”