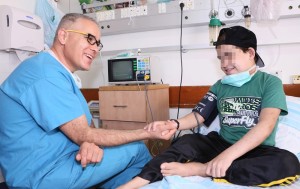 Haifa, Israel — September 8, 2014 … For years, M, a 14 year old boy from Gaza, had suffered from kidney failure. Recently, the youth’s doctor informed his family that without a transplant, the boy would die. Exacerbating his condition, M’s blood also coagulated too easily, reducing the chance of a successful transplant.

Against all odds, with the donation of a kidney from his sister, Rambam Hospital doctors saved the boy’s life.

To stay alive, patients who suffer from kidney failure require a transplant. When that problem is intensified by excessive blood coagulation, they need a great deal of luck too.

One such patient was 14-year old M. He urgently needed a kidney transplant, but his blood condition had obstructed all blood vessels in his groin except the one vein through which he received dialysis. This significantly lowered chances for a successful transplantation.

Doctors explained to M’s family that it was only a matter of time before the final vein would also clog up, preventing dialysis and greatly threatening the boy’s life. To save him, his sister decided to donate a kidney.

Eight years ago, the boy had received a kidney donation from his brother, but the transplant, performed in Egypt, failed immediately. In light of this situation, Rambam doctors made it clear to the family that M’s chances for success were especially low. Despite this, his sister insisted upon the donation.

As a result, the doctors worked ‘in reverse’: first, they operated on M and checked for useable blood vessels. Finding a few, they then removed one of his sister’s kidneys and transplanted it in within M.

To compensate for all the blocked veins, M’s body had developed a system of bypass veins. Shortly after surgery, it became apparent that this collateral network could not stand up to the demands of the transplant.

Two hours after leaving the OR, the youth was returned there. Examinations revealed that all vascular connections performed by Rambam doctors were working, but M’s own blood vessels were not sustaining the transplanted kidney.

The Rambam medical staff had never been confronted with such a situation before. “It was a nightmare scenario,” said Dr. Ran Steinberg, head of Pediatric Surgery. To solve the problem, the doctors implanted a synthetic connector between the vein exiting the kidney and the one that exits the liver.

This innovation worked and M’s body was able to function with the new kidney. After an eight-month stay in Rambam, the boy recently went home to Gaza, and will return for periodic check-ups.

“There are no words to describe the excitement of triumphing in an impossible situation. Not everyone believed we would succeed,” said Dr. Steinberg. “As soon as M started to recover, our doctors’ smiles returned. M is a great kid and he will be able to enjoy the regular life of any child his age.”